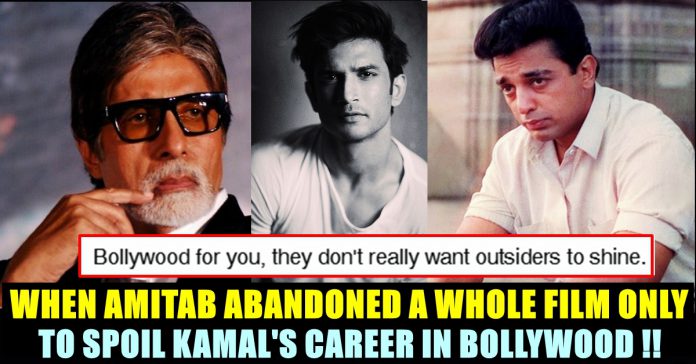 Followed by the demise of Sushant Singh Rajput, Bollywood film industry became a subject to severe criticism. Social media users including few influential celebrities slamming the big names of bollywood and accusing them for not letting an outsider to shine in the industry. When Kangana Ranaut said that Sushant’s hard work went unnoticed due to Nepotism in Bollywood, Vivek Oberoi stated that Sushant went through what he experienced years back. Veteran actor Prakash Raj also said that he survived Nepotism. “Nepotism, I have lived through this .. I have survived … my wounds are deeper than my flesh ..but this child #SushanthSinghRajput couldn’t.. will WE learn .. will WE really stand up and not let such dreams die .. #justasking” he wrote in his tweet.

#nepotism I have lived through this .. I have survived … my wounds are deeper than my flesh ..but this child #SushanthSinghRajput couldn’t.. will WE learn .. will WE really stand up and not let such dreams die .. #justasking pic.twitter.com/Q0ZInSBK6q

Now, in a way of proving all these accusations, an old video of veteran filmmaker Bhagyaraj revealing how Amitabh Bhachchan abandoned a whole movie, only to ruin Tamil actor Kamal Haasan’s career in Bollywood, is going viral in the micro blogging social media site. Being considered as one of toppest actors by having more than 190 films to his credits, Amitabh Bhachchan is a dear friend to both Rajinikanth and Kamal Haasan with whom he shared his screen space in Bollywood films. Unfortunately, Amitabh is yet to make his debut in Tamil film industry whereas Rajinikanth and Kamal Haasan made significant movies in Bollywood industry.

“In that film which was directed by S. Ramanathan, both Amitabh Bachchan and Kamal Haasan were roped in together. It was shot halfway but was dropped when Amitabh Bachchan intervened. As per the story, Kamal Haasan should die at the end which is the only way to conclude the story. If he dies the character of Amitabh Bachchan would be overshadowed and will make no impact among the audience. Knowing about this, Amitabh Bachchan asked the director to drop the movie and accepted to give compensation.” said Bhagyaraj in the interview. According to Bhagyaraj, Amitabh felt that letting a south Indian actor to ruin his career is not a sane decision.

Here’s the video that is doing rounds :

Bollywood is waking up & talking about how talented actors get ignored by their jealous colleagues. This happened way back in 80's. #KamalHaasan-Amitabh starrer Khabardaar' was dropped only because Bachchan felt @ikamalhaasan effortlessly overshadowed him🙂#SushanthSinghRajput pic.twitter.com/rwC0QNtrC5

This particular post is being widely shared by the Twitter users with captions slamming Amitabh Bachchan along with the entire Bollywood industry.

Bollywood for you, they don't really want outsiders to shine. @SrBachchan asked to drop #Khabardar as he realised that @ikamalhaasan got a better role in the film. Petty politics? https://t.co/5nmX0wKwiF

Comment your views on this revelation made by Bhagyaraj !!

Singer Chinmayi, on Tuesday, made it public that she got blessed with a twin babies, a boy and a girl and responded to the...