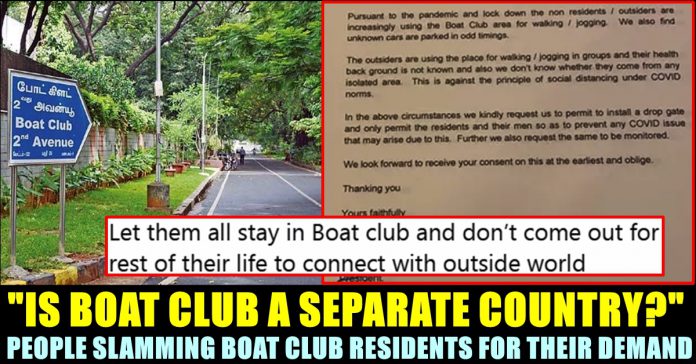 Chennai’s Boat club residents welfare association wants people from other part of the city not to enter their area for walking and jogging. They made this request to Chennai city police by producing a formal letter which left the police officials in utter shock. However, the Corporation commissioner has rejected the request to place a gate at the entrance of the residential area as to prevent non-residents from entering.

Ravi Appaswamy, president of the boat club welfare association submitted a letter to Chennai city police commissioner AK Viswanathan on 27th of May. The letter requested for drop gates to be installed at the entrance of upscale locality. The letter complained about the non-residents who are using the Boat club area for walking and jogging and that unknown cars are parked during odd timings.

“Outsiders are using the place for walking/jogging in groups and their health background is not known and we don’t know whether they come from any isolated area. This is against the principles of social distancing under COVID 19 norms” the letter said which became a subject to severe criticism in online.

It is notable that the homes of some of the most influential personalities such as BCCI former president and industrialist N Srinivasan, TVS group chairman Venu Srinivasan, SUN TV executive Kalanithi Maaran, Lok Sabha MP Dhayanidhi Maaran, Shyam Kotheri and top management officials of TTK, Murugappa and MRF groups are located in Boat club.

“Modern day version of untouchability peeping out of vultures” wrote one of a social media user in Twitter whereas another one asked “Are they the owners of the houses alone or the roads too”. One more user went one step ahead and suggested demanding the residents of Boat club area to pay 10 times property tax to get this special treatment.

Check out some of the reactions for this request below :

Is grocery and vegetables comes from known and healthy area? What do they eat? Insects? #boatclub

I think this request has to be accepted upon one condition that none of these Boat Club residents should ever come out of their area to mainstream Chennai. It is this mindset of these people which is dangerous. https://t.co/llvSM2aVGK

Is #BoatClub a separate country?

One of the places to be quickly flooded in Chennai is Boat Club Road. When the monsoon arrives, will they keep out corp/ MW workers who come with pumps to drain water out? https://t.co/RlxpOwNfMG

A recent report suggested that Chennai corporation commissioner G Prakash denied the request made by the residents of Boat Club area. While interacting with television channel Times now, he said that no such special treatment will be given to the residents as the law has no provision for such a demand.

Greater @chennaicorp Commissioner Prakash IAS says that no 'special treatment' will be given to residents welfare association. Boat club residents demands can't be accepted & there is no provision in law to do something like this… #BoatClubRaj https://t.co/yeHjcKCqgh

Comment your views on this demand made by the residents association and the response they received !!

After the election results of West Bengal emerged on Monday, the state has been witnessing political violence. A video of miscreants who believed to...