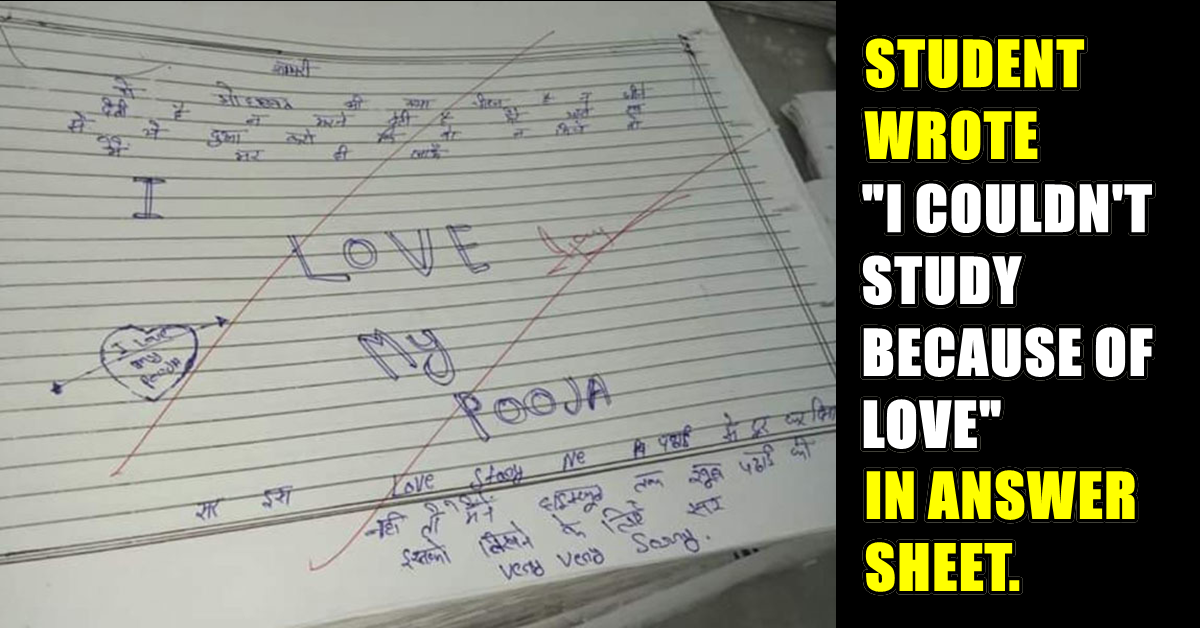 In Uttar Pradesh, a board of exam student made an emotional appeal through the answer sheet on requesting the paper correcting teacher to pass him in the exam somehow.

From blaming romance for lack of preparedness, the student also hinting that he has no father in his life. The boy has not written anything else related to the examination except his personal message. We have heard that students also attaching currency notes along with their answer sheets and many other being more dramatic and imaginative. “I love my Pooja,” writes a student of UP Board’s intermediate exam in bold as he begins answering his chemistry paper. “Yeh mohabbat bhi kya cheez hai, na jeene deti hai aur na marne… Sir, iss love story ne padhai se duur kar diya warna… (This love is a strange thing. It doesn’t let you live nor does it allow you to die; Sir, this love story didn’t let me study for the exam, or else…),” the examinee goes on to explain in detail. Rest of the answer sheet is blank except for a beautifully drawn heart pierced by an arrow. Well, he is not the only one who chose to describe in great detail chemistry of his own relationship rather than care for some poor John Dalton or Dmitri Mendeleev.

Muzaffarnagar district inspector of school Munesh Kumar said, “Yes, we are getting currency notes stapled with answer sheets and some weird messages.” “Guruji ko copy kholne se pehle namaskar. Guruji, pas kar dein. Chitthi tu ja sir ke pass, sir ki marzi fail karein ya pass (Accept my greetings before you begin to check this answer sheet. Please pass me. O, my letter, you fly to the teacher, it’s up to him if he fails me or not),” wrote another examinee.

One student made an emotional appeal. “I have got no mother and my father will kill me you fail me.” Another student threatened to commit suicide if he gets failed. A Meerut-based government teacher who did not wish to be quoted told TOI, “Most of the messages are written to attract sympathy and attaching currency notes is a regular phenomenon that has been occurring for years now.”
[wp_ad_camp_1] The evaluation exercise was started on March 17. So far, over 60 lakh copies have been evaluated. A total of 248 centres are designated across the state for evaluation and more than 5.5 crore copies of classes X and XII students are being checked by 1.46 lakh teachers.

Results of Uttar Pradesh Secondary education board exams this year are expected early in the third week of April to facilitate further admission for students.

9 Brilliant Attempted April Fool Pranks That Became REAL In The Future : Wow!!
8 Simple And Unknown WhatsApp Hidden Shortcuts That You Didn’t Know All These Days!!