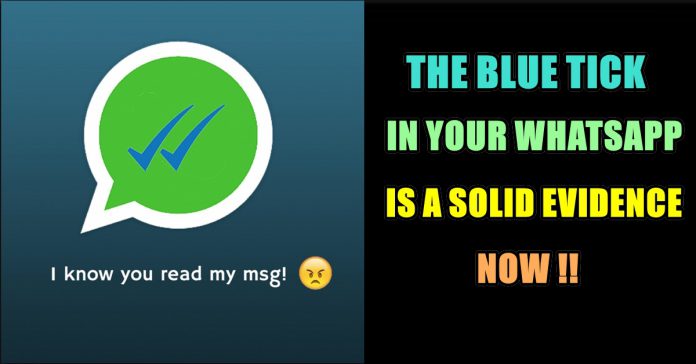 Blue Tick In Whatsapp Can Cause You Big Time Trouble Legally !! : SHOCKING !!

Legal notice or messages sent through WhatsApp messaging app are valid legal evidence under law, and the blue tick over the messaging app is a valid proof that the respondent has accepted the physical copies of the communication, said Bombay High Court.

The Bombay High Court, while hearing an application filed by the SBI Cards and Payments Services Pvt Ltd (the claimant) against a resident Rohit Jadhav, observed that the defaulter, who was evading the bank, had not only received the notice in a PDF file but also opened it and read its contents. “(Jadhav) was served by an authorised officer by sending a PDF and message to his mobile number as a WhatsApp message,” Justice Gautam S Patel said in his order.

“For the purposes of service of notice under Order XXI Rule 22 of the Code of Civil Procedure, I will accept this. I do so because the icon indicators clearly show that not only were the message and its attachment delivered to the respondent’s number, but that both were opened,” Justice Patel said.

SBI Cards had filed a case against Jadhav, a Nalasopara (Mumbai) resident for recovery of credit card dues of Rs 1.17 lakh, but Jadhav was not accepting any notice or communication from the company or its legal representatives. After tracing Jadhav’s mobile number, the company sent a notice on WhatsApp and the kept the record of the message. Jadhav had credit card dues of Rs 85,000 in 2010. In 2011, following arbitration proceedings, he was ordered to pay back the amount along with interest. When he failed to make the payment, the company approached the high court with the execution application in 2015 to enforce the award. Over the past two years, the bank had been trying to serve the notice about the litigation on Jadhav but without success as he kept shifting his rental accommodation. Law states that a notice is served in person or through registered post. Following the enactment of the I-T Act, which recognises electronic communication as evidences, courts have allowed legal notices through email.

A series of screen shots shared by a twitter user, complaining against one of the customer care personalities about how he insisted on Tamils...