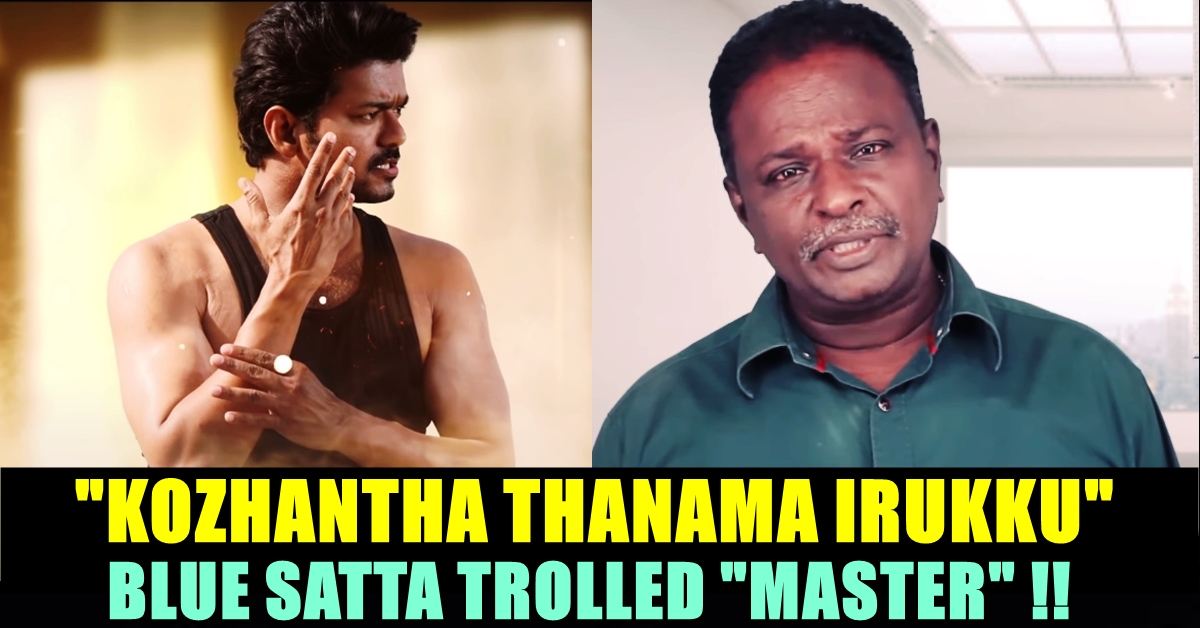 Reviews from all over the Internet are surfacing in Internet regarding the Vijay-Vijay Sethupathi starrer “Master”. Popular movie reviewer Blue Satta Maaran also uploaded a review in his youtube channel which has 1 million subscribers. He who seems to have disappointed by the movie, trolled it as usual and said that he couldn’t suggest people to watch the movie as the screenplay of “Master” is not as good as director Lokesh Kanagaraj’s previous venture “Kaithi”.

The most awaited Vijay’s “Master” released on theatres in Tamil nadu on Wednesday and the fans of Tamil cinema are celebrating the biggest event with extreme happiness as they are witnessing a proper mainstream feature film of a top tier Tamil actor after nearly one long year. Reviews and reactions for the Vijay and Vijay Sethupathi starrer are pouring in Internet from all the directions from fans and celebrities.

Reviewing the film, Maaran took a slight dig at the current political status of Tamil nadu. “Like how we are being ruled by BJP after voting for ADMK, an observation school is being organised by Bhavani instead of the government” Maran trolled.

“Till the interval, the film seemed good. After watching the whole movie, it made me think why a separate film was played during the first half. They could have started the film after joining the observation school as a teacher. They made a three hour film with a short story. They can extend it more but a strong screenplay is required for that” the reviewer said.

Blue satta criticized the less impact made by the supporting roles and trolled the scene where Andrea fights with the villain with bow and arrow. He also trolled the scenes where heroine being chased by the villains and the idea of imprinting a tattoo to the goons. However, he appreciated the performance of Vijay Sethupathi and Vijay in the film. “I couldn’t suggest people to watch the movie as it didn’t have a strong story and screenplay like Kaithi had” he concluded his review.

Madhavan’s Heart Winning Reply To Fans Who Thrashed Him For “Maara” !!
11 Marriages At The Age Of 22 ?? Villivakkam Lovely Ganesh Got Arrested !!