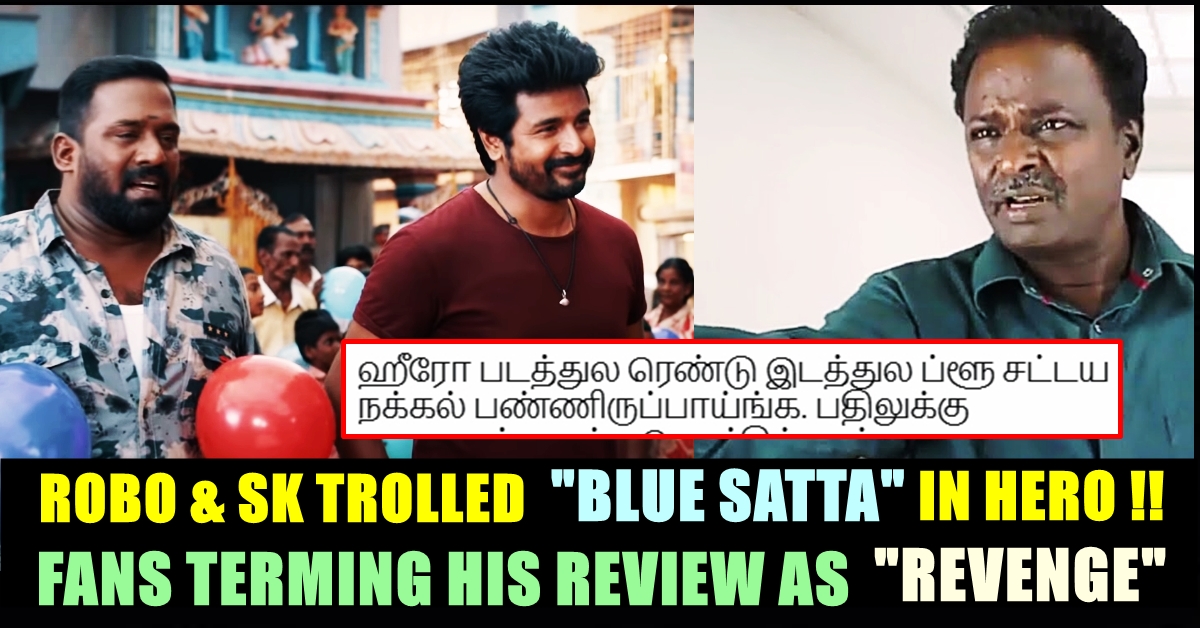 We can count the films that received positive reviews from Blue Satta Maaran with our fingers. The man who supported few socially responsible films in the past, didn’t gave a single positive statement about Sivakarthikeyan’s recently released film “Hero”.

The “Hero” film tries to point out the flaw in the educational system of Indian society. Sivakarthikeyan’s “Hero” movie released across the world on 20th of December. The film directed by “Irumbuthirai” fame P.S Mithran talks about the skills nurtured by young minds with their own interest. Added with commercial elements, the film conveys a message to the students and parents of current generation.

Produced by KJR studios, the film has Abhay Deol and Ivana in prominent roles. The female lead is going to be played by Kalyani Priyadarshan, who is making her debut Tamil film with “Hero”. The Central Board of Film Certification awarded a clear ‘U’ certificate to the film. As soon as the trailer of the film released it reached millions of views in youtube.

As soon as the film released reviews are pouring from all the directions of social media. The film mostly receiving positive reviews from the general audience which didn’t stop Blue Satta Maaran from thrashing it. The reviewer who enjoys more than 10 lakh subscribers found flaws in this partly commercial movie.

The reviewer who is all set to make his directorial debut, said that the film looks like a sequel of Arjun’s Gentleman. He said that the film doesn’t give any solution to the problems it addressed. “Apart from pointing finger towards a corporate big shot, the film does not give any solution. There is nothing worth noticing in it as well” he said. “I feel very pity for those applauded for this kind of film” he added.

Though it is highly believed that the Maaran tarnished the film for its content, few people are saying that he trolled the film because of the sly dig took by the makers of the movie in the movie. Robo Shankar who played the role of an accomplice of Sivakarthikeyan in the movie, would call a man as “Blue Satta” in a scene. He will further mock the way he (Blue satta) earned his money. Though it completely complies with the scene, many thought that the makers of “Hero” tried to troll the reviewer indirectly.

Check out some of the reactions regarding this in twitter :

Blue Satta caught in controversy many times for bashing films without considering the profile of actors or the directors of the movie. He had clash with the makers of many films often. “Goli Soda” Director Vijay Milton and Charlie Chaplin director Sakthi Chidambaram condemned him for the way he reviewed certain movies.