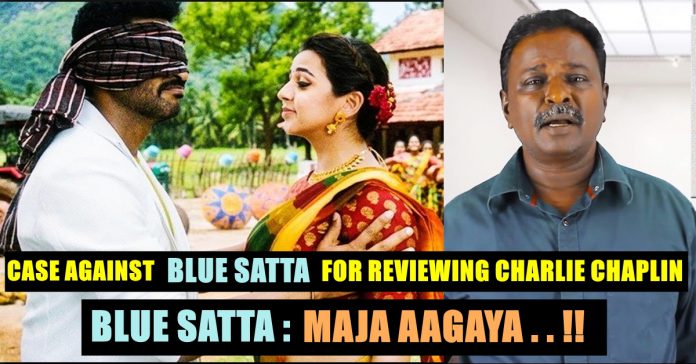 Shakthi Simthambaram the director of Charlie Chaplin 2 has thrashed blue satta Maaran in the recent press interview. He alleged that Maaran demanded money from him to change his review. He also complained against “Blue Satta” in commissioner office for demanding money to give good review. 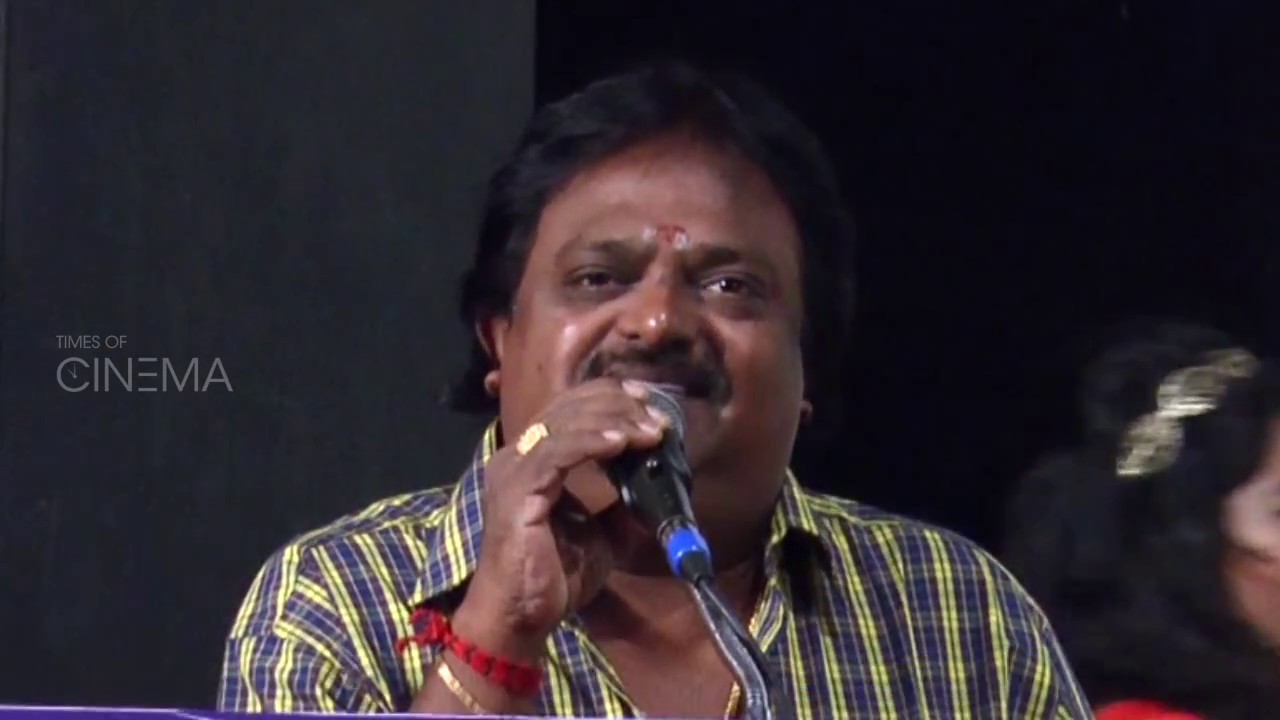 In the press meet, producer Siva and Shakthi Chidambaram thrashed blue shirt and alleged that he ruining the lives of many technicians who are part of the Kollywood films. “Our only aim is to ban him from reviewing films. Many producers are called me in the morning and supporting me in this” said Shakthi.

After a gap of eight years, director Sakthi Chidambaram is returning to direction with Charlie Chaplin 2, starring Prabhu Deva, Prabhu, Nikki Galrani and Adah Sharma. It is an out-and-out comedy movie laced with commercial ingredients.

Here’s the complaint letter that was produced by the director : 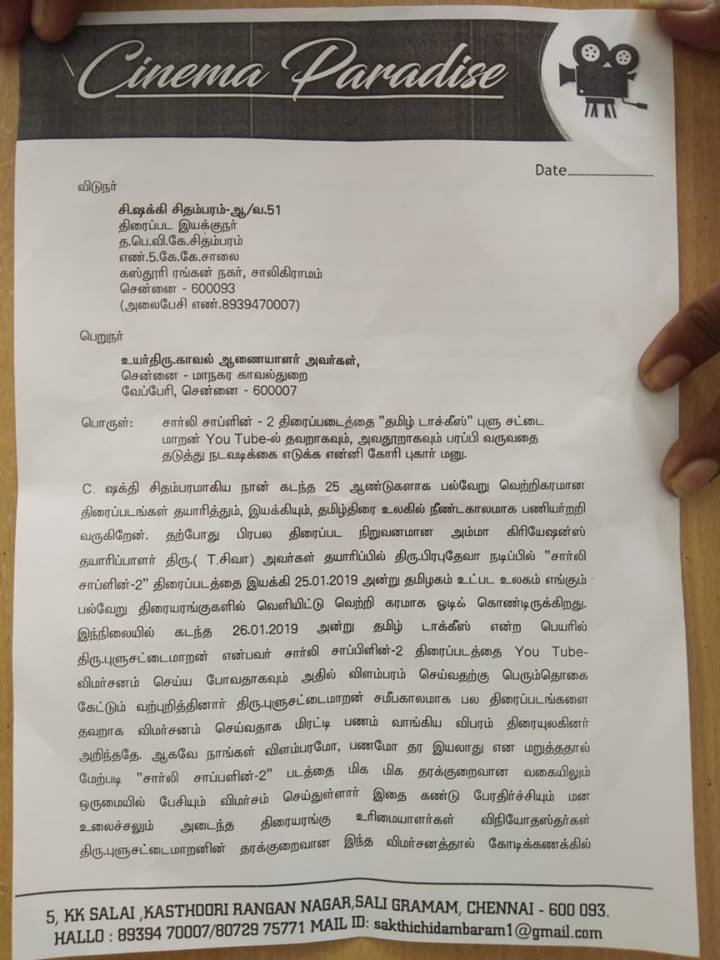 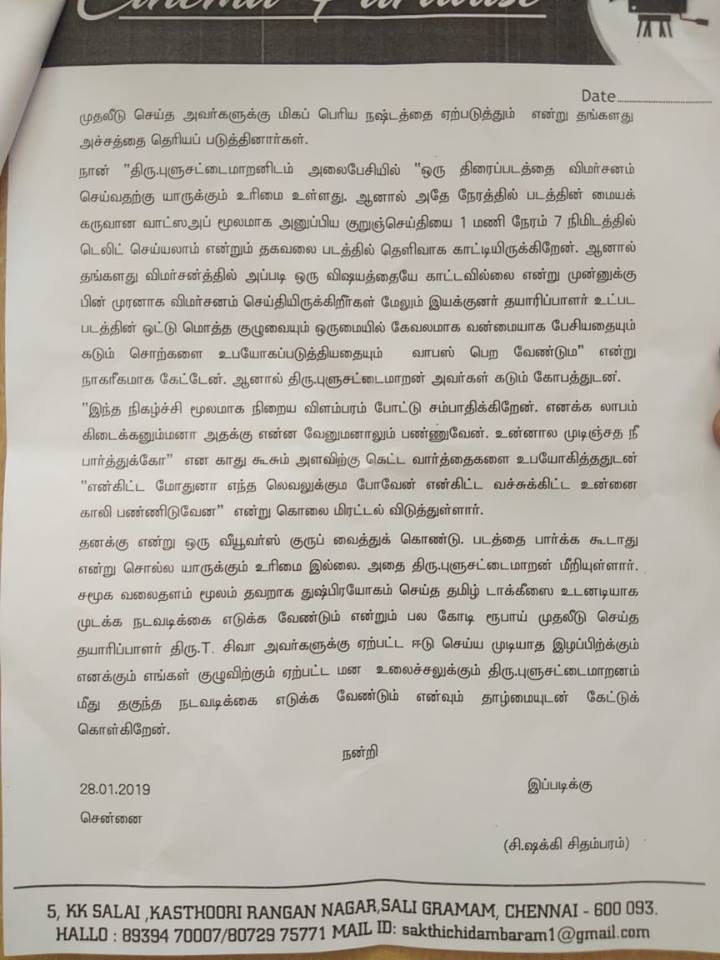 The film released yesterday in the theatres and along with it the review of Blue Satta also released. “Blue Sattai” Maaran is one of the prominent movie reviewers of Kollywood films. He is very well known for his rural slang, funny phrases, short stories and real life incidents in his movie reviews. For his unique style of movie reviewing, the man who always wears blue shirt has a separate set of fan following and his youtube channel Tamil talkies enjoys nearly 8 lakh subscribers.

The reviewer narrated the story of the movie and said that those who made this are not updated at all. The whole film relies under the protagonist deleting a whatsapp video message he sent to his fiance in which he abused her. “But there is a recent update in Whatsapp where one can delete the message they sent to someone with a given options in whatsapp. I myself know this from these guys only” Blue satta pointed his fingers to the people behind the camera.

Now after witnessing the allegation against him, Blue satta’s first tweet is nothing but “mazaa aagaiya, mazaa aagaiya..” , dialogue from Kaala movie.

He also added that “if the words are harsh, deal with it” in one of his tweet :

thanks for stating that restricting youtube for personal favours is impossible and youtube has zero tolerance for such activity.
if the words are harsh, deal with it. the ticket money is ours and valuable end of the day. https://t.co/c1jOFw1KxJ

Meanwhile a journalist named Priyanka Thirumurthy from The News Minute has stated that Blue Satta has decided to deal the case legally. Quoting one the tweet of Maaran, Priyanka wrote “Just spoke to @tamiltalkies . He says allegations by Sakthi Chidambaram are false. He will handle the matter legally!”

Just spoke to @tamiltalkies . He says allegations by Sakthi Chidambaram are false. He will handle the matter legally! https://t.co/ZkNFWh1nKC

What do you think on this allegation of Ble Satta ?? Comment your views below !!