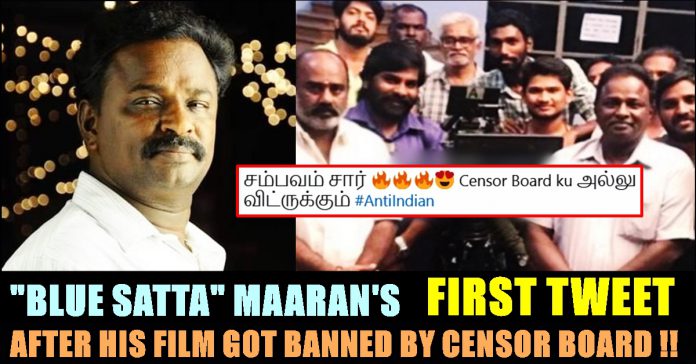 After Censor Board refused his film “Anti Indian”, Bluesatta Maaran came up with a tweet in his official twitter account saying that he has approached the revising committee for reconsideration and assured that his film will get released at appropriate time. Reacting to this tweet, many of his followers wondered what he would be the plot of the film that made censor to refuse and suggested him to release the film in any of the OTT platform.

On Wednesday, it was reported that the film “Anti Indian” of Blue Satta Maaran got banned by censor board and left the Internet talking about it. To clear the air on the various kind of speculations, trolls and predictions, Maaran uploaded a tweet and confirmed the release of his debut film.

Few days back, #AntiIndian movie was screened to the Censor Board team. After watching the film, The board refused the film.

As a result, We have decided to approach the revising committee for reconsideration. The film will be released at appropriate time.

“Censor board has refused, he must have made a cracker of a film.” said a follower said in his reply tweet whereas another one said “release in OTT, OTT doesn’t need censor right?”. Replies trolling him based on the way he trolled all the movies through his reviews were also surfaced.

“Blue Sattai” Maaran is one of the prominent movie reviewers of Kollywood films. He is very well known for his rural slang, funny phrases, short stories and the reference of real life incidents in his movie reviews. For his unique style of movie reviewing, the man who always wears blue shirt has a separate set of fan following and his youtube channel Tamil talkies enjoys million subscribers.

He is one kind of a reviewer who enjoys a massive fan base and equal number of haters. Probably he would be the person whom the people of Tamilnadu asked to make a movie the most for the way he criticized the films of others. In a way of replying to them, the reviewer, in 2019, announced that he is going to make his directorial debut. It was announced that Suresh kamatchi who is producing Simbu’s “Maanadu” has bankrolled the film.