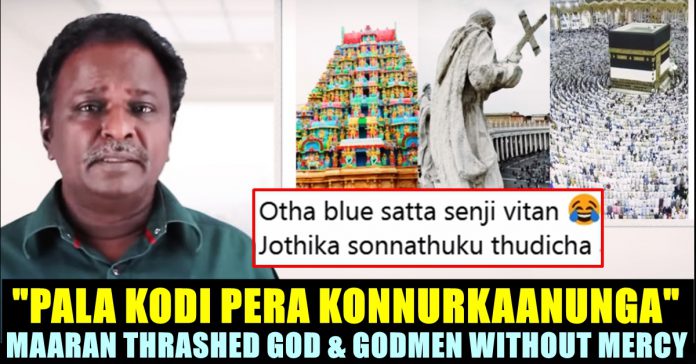 Popular youtube icon Blue satta Maaran who is known for his Tamil movie reviews, released video after a long time. As there is no movie release in Tamil film industry for the past one month due to corona crisis, Maaran, for the first time came up with a video which not related to cinema.

“Blue Sattai” Maaran is one of the prominent movie reviewers of Kollywood films. He is very well known for his rural slang, funny phrases, short stories and real life incidents in his movie reviews. For his unique style of movie reviewing, the man who always wears blue shirt has a separate set of fan following and his youtube channel Tamil talkies enjoys more than 10 lakh subscribers.

In this recent video, the movie reviewer has explained how Coronavirus made us realize that the religious beliefs ruined the lives of people all these years. He started his video by thanking Scientists, Doctors, Medical workers, Police officers and volunteers who are combating against the virus regardless the impact of the virus. “As soon as the awareness regarding the coronavirus emerged, they closed churches in the Vatican city. Then they close Meccas all around the world. In India, they closed the most powerful Tirupati Devasthanam, Sabarimala and Madurai Meenatchi Amman temple in my home town. Likewise they closed all the religious places across the globe”

In a way of depicting a real life incident, Maaran said how people avoiding worshipping God due to this corona crisis. “Religious people highly believe that if they miss to do the rituals at right time, they will be punished by God severely. In my home town Madurai, Chithirai Thiruvizha will take place every year. Lakhs of devotees would attend the grandest event to worship God. But this year only 40+ members attended the event and most of them are reporters. When we asked them how it is not a sin now, they said people will die only if they get united in large number at this time” Maaran mocked the religious beliefs in his hometown.

Maaran went on to accuse religions for being the cause for crores and crores of death across the world. “Behind every massacre in the world, there will be a God or religion or its subsection. God neither stopped the murderers nor saved the victims. Do we really need this God?” he asked.

Watch the video him here :

“They say God exists to lead people in good path. But nothing like that happened so far. On the contradict, we lost so many lives and people’s things and time. It helped only the so called Godmen who are now hiding in this corona situation. We must unite to destroy the religion like we have united hands to destroy coronavirus” the film critic said.

This video from him going viral in social media platforms. Check out some of the reactions it is receiving :

Maaran is one kind of a reviewer who enjoys a massive fan base and equal number of haters. Probably he would be the person whom the people of Tamilnadu asked to make a movie the most for his way of criticizing other movies. In a way of replying to them, the reviewer recently announced that he is going to make his directorial debut under Suresh Kamatchi’s production. The film is expected to release post lockdwon.

Mamathi Chaari’s Elimination Saddened This Famous Kollywood Director To The Extreme !! He Mourns !!

The Bigg Boss Tamil house saw the first contestant evicted Sunday. Popular anchor Mamathi Chari, who entered the house a couple of weeks ago along with 15 others, was evicted by Kamal Haasan following...