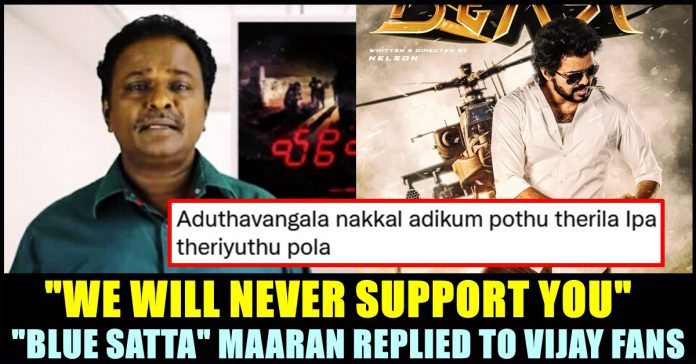 “Blue Satta” Maaran who recently conducted a press meet to clarify on what really happened at the censor board, replied to negative criticisms that are being made against him in the micro blogging social media platform. He replied to a couple of Vijay fans who said that he will never get the support from fans as he made many filmmakers to face loss through his reviews. He also replied to Dinamalar daily which trolled Blue Satta Maaran for composing music for his own film.

After completing direction for his debut film “Ant Indian”, Maaran faced issues at the censor board which declared that the film got refused. However, with the help of court, Maaran got U/A for his film and is all set to start promotions for it by releasing the trailer. In a recent press meet, he made it clear that his film is going to be a theatrical release, before OTT streaming.

As a part of the promotions for his film, Blue Satta started reacting to negative comments that are surfacing against him, regarding the release of his first film. A twitter user named “Pugazh”, in his comment, said “I will never support you as a cinema fan as you made many filmmakers face loss through your reviews. Don’t forget that thousands of us are waiting to find flaws in your film. I also know that you have took a controversial subject to make the film success”

Replying to him, another fan named Balaji said “He doesn’t feel the pain while trolling others and now he is tasting his own medicine”. Capturing the screen shot of both the comments, Maaran, through his official twitter handle, thanked them by adding “Beast” before their names. “Thanks for the encouragement. Encourage us more” Maaran said in his tweet.

Maaran also thanked Dinamalar daily which said that Maaran is going to watch his film alone as he also composed music for his film.

Comment your views on these replies of “Blue Satta” Maaran !!

Previous articleRJ Balaji Got Criticized For Not Knowing How To Drive A Car In Shooting Spot !! Check How He Handled The Situation
Next articleRavichandran Ashwin Shuts Down Media Portals In Style !!