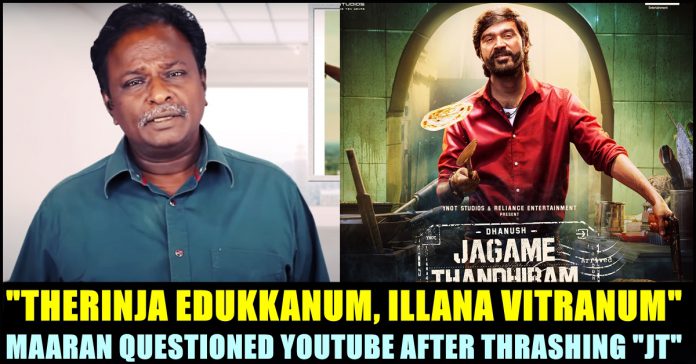 Tamil movie reviewer “Blue Satta” Maaran, through recent video, reviewed the recently released “Jagame Thanthiram” of Karthik Subbaraj. Known for his harsh criticisms towards Kollywood movies, Maaran redirected people not to watch “Jagame Thanthiram” and suggested them to eat “Parotta” instead and sleep. He said that the film is flawed in many ways and trolled director Karthick Subbaraj by saying that he didn’t research enough to make the Dhanush starrer.

After so much expectations about the theatrical release, the film was sold to Netflix due to the COVID 19 pandemic. It was released on 18th of June and is being watched by millions of Netflix subscribers across the Globe. The film’s plot revolves around a rural gangster who is getting hired by a overseas crime lord take down a rival.

“Story of “Jagame Thanthiram” is weaker than the story that comes to our mind while drinking tea in a tea shop. With that story, they are branding it as a film that talks about Sri lankan Tamils, Migrant Tamils, LTTE etc. The film was made without a basic research. No police could be seen in the entire film. Seems they were restricted due to lockdown norms” Blue Satta Maaran trolled the film.

He also criticized Tamil filmmakers for ruining the good actors of other film industries. “Earlier, they wasted a talent like Fahad fazil and now they ruined Joju George” he said. “They also wasted James Cosmo who worked in projects such as Brave Heart, Game of Thrones etc.” Blue satta Maaran said and went on to troll the climax of the film. “I was searching for Boby Simha while watching the film as it is Karthik Subbaraj film. Excluding him from the film is a plus point” he trolled.

“I couldn’t understand how Karthick Subbaraj manages to get huge projects, despite giving one hit film “Pizza”. Many would disagree with me saying that his “Jigarthanda” is a quality film. It is a copy of a Korean film” said Maaran referring to “A Dirty carnival”. He sarcastically appreciated “Jagame Thanthiram” producer for his wise decision of selling the film to “Netflix”. He went on to take a dig at Karthick saying that he is taking revenge against English people for looting from India earlier during their rule by selling them a film like “Jagame Thanthiram”.

The video garnered 4 lakh views in no time and is currently trending in youtube at 2nd spot with various kind of reactions. Meanwhile, a twitter user came up with a tweet saying that the video of Maaran is not being displayed in the trending list despite of number 3 trending.

Previous articleTeachers & Administrators Of Sushil Hari Raised Voice Against The Arrest Of Sivasankar Baba !!
Next articleMohan G Wants Youtubers Of Plip Plip Channel To Get Arrested After Madan !! Check Reactions

Irfan Pathan Gave A Fitting Reply To A Fan Who Tried To Mock Him !!

The Pathan brothers may not be a part of the Indian cricket team but they still have a huge fan following, especially Irfan Pathan...