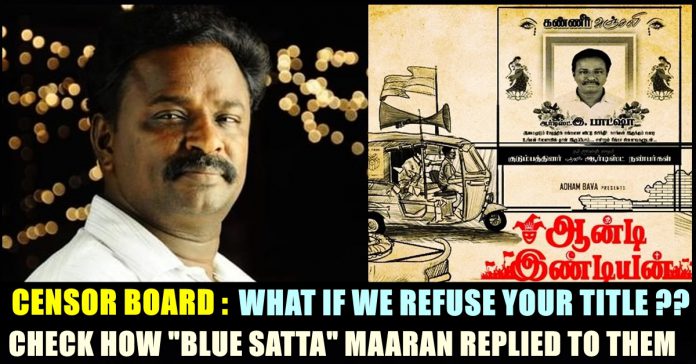 Blue Satta Maaran Opened Up About The Struggles He Faced During The Censor Process !!

Ila Maaran who is popularly known as “Blue Satta” Maaran, conducted a press meet about the issue he faced during his film’s censor. The film reviewer said that his film received zero cuts with the help of court after receiving 38 cuts from the censor board. “IRRESISTIBLE.. From 38 cuts to Zero cuts. Time to thank the Honourable Court for the historic verdict. A shot in the arm for small budget film producers of Tamil Cinema who are intended to make bold movies.” he said through his tweet after getting U/A for his film.

Time to thank the Honourable Court for the historic verdict.

A shot in the arm for small budget film producers of Tamil Cinema who are intended to make bold movies.

Pic: Myself with the producer of Moon Pictures – Adham Bava. pic.twitter.com/kchfRKk2uZ

Maaran is one of the controversial reviewers in the industry as he had clash with the makers of the films often. “Goli Soda” Director Vijay Milton condemned him for the way he reviewed the movie “Vivegam” which had actor Ajith in the lead. A legal case was filed against him by “Amma Creations” Siva for the way he reviewed Charlie Chaplin-2 movie. In the review he criticized the makers by saying that they doesn’t have common sense.

He is very well known for his rural slang, funny phrases, short stories and the reference of real life incidents in his movie reviews. For his unique style of movie reviewing, the man who always wears blue shirt has a separate set of fan following and his youtube channel Tamil talkies enjoys a million plus subscribers.

After Censor Board refused his film “Anti Indian”, Bluesatta Maaran came up with a tweet in his official twitter account saying that he has approached the revising committee for reconsideration and assured that his film will get released at appropriate time. Many celebrated the refusal of Maaran’s debut film as he thrashed almost every hero’s movies through his reviews.

With the help of court, Maaran managed to get U/A for his film which is expected to hit the screens soon. He said that the trailer of his film is going to be launched next week and the promotion is going to start soon. In the recent press meet, the film reviewer talked about the struggles he faced during the censor process of his film. He said that the film is about an individual who doesn’t care about the country for his personal benefits.

After the reports that surfaced on youtuber Madan OP's abscond, Puthiya Thalaimurai news channel, on Tuesday, came up with a news report saying...

“Asuran” Fame Teejay Shared On The Mental Trauma He Is Going Through !!

Teejay Arunasalam who is widely known by his stage name "Teejay" shared a long story through his Instagram about the importance of being kind...