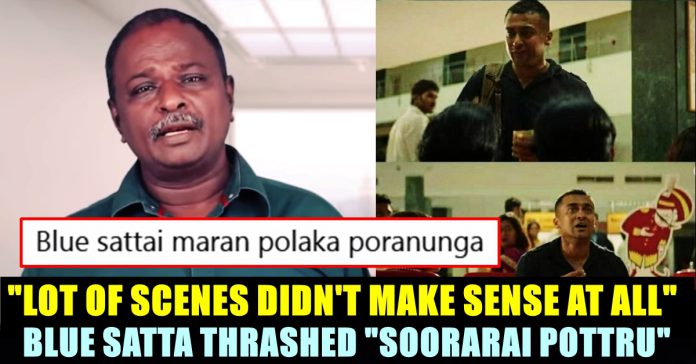 While majority number of Tamil cinema audience are appreciating the recently released “Soorarai Pottru” film for its never before seen backdrop and content, “Blue Satta” Maaran, a popular Tamil movie reviewer branded the movie as a “mediocre” one and trolled the content by saying that some scene are baseless. On 12th of November, “Soorarai Pottru”, directed by Sudha Kongara was released on Amazon Prime amidst COVID 19 crisis.

Blue satta Maaran started his review by mocking ace director Maniratham whom Sudha Kongara associated before venturing as a filmmaker through 2010 flick “Drohi”. “In Mani sir movies, they would do something foolish by thinking that they are going to do something different . Likewise, in this film, they showed the bride visiting the groom’s place with her family prior marriage and engagement.” he said in his review.

After that, Maaran said that they wasted 30 minutes of time by showing Hero and heroine talking about useless stuffs. “I don’t know how long they are going to confuse us by showing the heroine while telling the movie’s story in the pretext of making film for all class” Maaran expressed his disappointment.

“Lot of scenes doesn’t made sense in the film. For instance, the protagonist would beg people for money in Airport to catch a flight to meet his father who is in the deathbed. Do you people even know the salary of a pilot officer ?? Why you people are keeping such scenes just for the sake of it?” maaran asked the makers of “Soorarai Pottru” who also roasted the Abdul kalam scene that took place in the film.

Maaran also trolled the scene where people of Chozhavanthaan deposited lakhs of money in a bank to help Nedumaaran to start his airline service. “Those scenes didn’t contain believability” he said in his review and added that the rural Madurai slang they attempted in the film failed miserably.

As soon as this review of Maaran surfaced, it started trending at no.1 in youtube with a views of 3 lakh plus as of now. 17,000 people liked his review and 9,000 people unliked it. Check out some of the reactions for his review below :

Whenever movie gets unanimously positive reviews

“Blue Sattai” Maaran is one of the prominent movie reviewers of Kollywood films. He is very well known for his rural slang, funny phrases, short stories and real life incidents in his movie reviews. For his unique style of movie reviewing, the man who always wears blue shirt has a separate set of fan following and his youtube channel Tamil talkies enjoys more than 1 million subscribers. However, he also gained equal number of haters for criticizing almost all the movies of top-tier actors.

Comment your views on this review of Blue satta !!