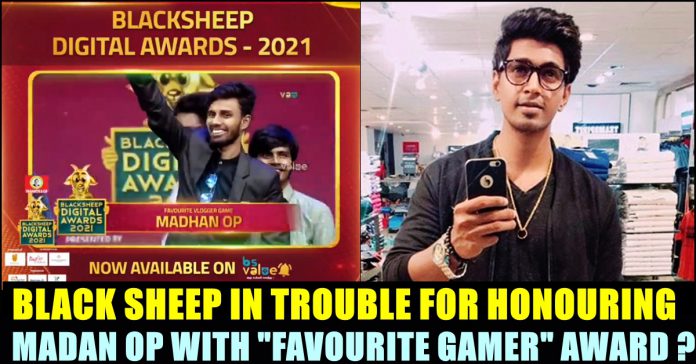 Cases for abusing women and portraying them badly (509), profanity (294 B), Misusing information technology, using banned mobile application has been filed against youtuber Madan who is popularly known as Madan OP aka “Toxic” Madan. He failed to appear before cyber crime police after he was summoned and Police had intensified the search to nab him. Now, a latest report of Polimer news channel has emerged saying that popular youtube channel Black sheep could be investigated to identify him. Black sheep honoured Madan with an award recently and it has been reported Police have decided to investigate those who provided him the award and the people who received the award on behalf of Madan to nab him.

Questions raised in social media platforms asking how Black sheep provided him the award without verifying the background of him who often involves in abusing girls/women through his videos.

Now, the latest report of Polimer News Channel has said Madan was involved in midnight chatting with minor girls, women and cheated money from them. To arrest him, Police tracked his cell phone and found that he is hiding in Salem through a conversation he had with a woman. However, he got escaped from there and Police have intensified the search.

After the reports that surfaced on youtuber Madan OP’s abscond, Puthiya Thalaimurai news channel, on Tuesday, came up with a news report saying that the gamer has challenged Tamil nadu Police through his recent live streaming video. He reportedly avoided talking bad words and interacted with his followers philosophically throughout his recent youtube game streaming video, according the latest report. Now, officers have intensified the search at Perungalathur and Salem to nab him, says a recent report.