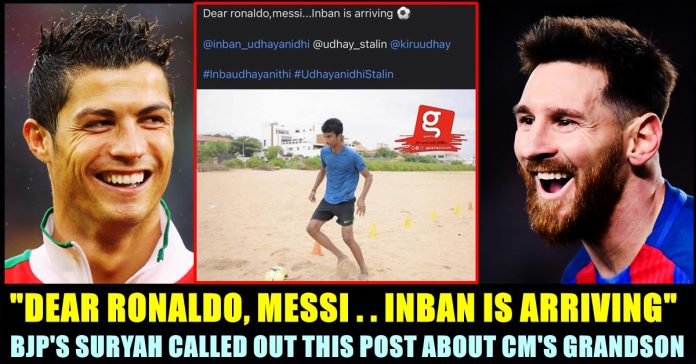 A picture of Chief minister MK Stalin’s grandson and son of Chepauk MLA Udhayanithi Stalin, Inbanithi Stalin who is also known as Inban Udhayanithi playing football at the beach is doing rounds in social media platforms with various kind of reactions from public. A digital media portal named Galatta media made a post with the picture challenging globally acclaimed football players Ronaldo and Messi. The post became subject to severe online troll whereas SG Suryah of BJP party called out the post, sarcastically terming it as “Terrific” journalism.

Most recently, North East Reorganising Cultural Association (Neroca) football team selected Inban Udhayanithi in a defender role. Sharing about the same, Neroca Fc, in their official social media handle, said “Transfer alert ⚠️ Another one from Chennai’s Trials. We are happy to announce the signing of the young defender @inban_udhayanidhi . Welcome to orange brigade🍊”

While sharing about how he feel son getting directly selected by Neroca football team, Inban said that he wants to become a football player. “I am receiving huge support and co-ordination from my family members for the decision I made. This selection boosted my confidence level. I didn’t talk about my football dreams to my grand father (Chief minister MK Stalin). Due to his hectic schedule, we are meeting each other only once or twice a week. Though I didn’t opened about my football stint to him, I know he would definitely support me” Inban said.

Report suggests that Christiano Ronaldo is Inban’s one of the biggest inspirations. He who is currently concentrating on playing for Neroca FC, recently played football in a beach it seems. Galatta Media shared the picture with a catchy caption in their social media handle’s timeline. “Dear ronaldo, messi…Inban is arriving ⚽” caption of Galatta media’s post which contained the picture of Inban Udhayanithi practicing football read.

Check out the screen shot of the post below :

Though encouraging a young talent like Inban to play foot ball is appreciable, the way universally acclaimed foot ballers such as Ronaldo and Messi got warned for Inban’s arrival instigated trolls and funny reactions. Check out some of such below :

Among the trolls and reactions, BJP’s spokesperson SG Suryah came up with a tweet in his official social media handle, calling out the post. “Tamil YouTube channel challenges #Ronaldo & #Messi with the impending arrival of Tamil Nadu Chief Minister #MKStalin’s grandson Mr.#Inbanithi’s arrival to the #Football scene. Terrific Journalism.” he said in his post.