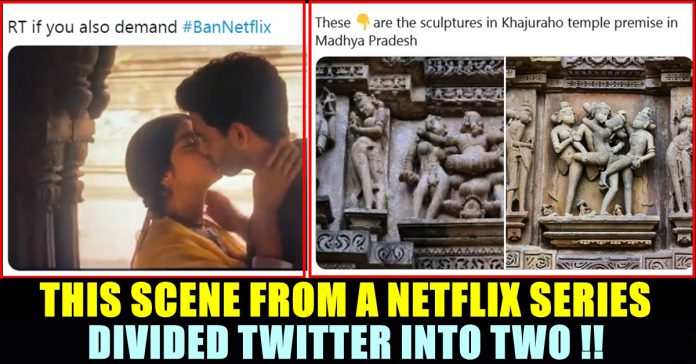 A scene that took place in a netflix series named “A Suitable boy” landed in controversy after a number of online users who belongs to “Hindu” religion found it hurtful. The scene shows a couple kissing each other in the premises of a Hindu temple. “Netflix fully destroying the Hindu culture. We will never forgive netflix.” said a twitter user whereas another one wrote “Why everytime Hindu religion and culture is targeted……it is time to teach these anti-hindu organisation a lesson for life…..we demand BAN on Netflix”.

Why everytime Hindu religion and culture is targeted……it is time to teach these anti-hindu organisation a lesson for life…..we demand BAN on Netflix😠😠😠😠😠 #BanNetflix

If secularism is very basis of India then why such scenes r not shot in other religious place?
Take a mosque or a church for example

Followed by such reactions in the micro blogging social media site, a BJP youth leader from Madhya Pradesh’s Rewa district filed a case against the streaming platform Netflix. He claimed that the scene promotes “Love-Jihad” which is a right wing conspiracy theory about relationship between Muslim men and Hindu women. The scene shows the woman and man as Hindu and Muslim respectively. The first information report has named Monika Shergill, Vice president, content (Netflix) and Ambika Khurana, Director, Public policies (Netflix).

Gaurav Tiwari, National secretary of the Bharathiya Janatha Yuva Morcha has demanded an apology and the removal of the objectionable scenes that encourages “Love Jihad”. “Kissing scenes (filmed) inside a temple of Lord Maheshwar (a historic town located on the banks of Narmada) have hurt sentiments of Hindus. This is also encouraging ‘love jihad’,” he said.

“I had asked the officials to check if the kissing scenes were filmed in a Hindu temple and if it hurt religious sentiments. The examination prima facie found that these scenes are hurting the sentiments of a particular religion” said Madhya Pradesh home minister Narottam Mishra.

“On a basis of a complaint filed by Gaurav Tiwari, an FIR is being registered under section 295 (A) (insulting the religious feelings and beliefs) of the Indian penal code against Netflix officials Monika Shergill and Ambika Khuranna” he added.

However, many online users expressed their frustration over the frequent trendings on demanding the “Ban” of applications and firms such as Amazon, netflix and Tanishq etc. “With this Boycott #Netflix bullshit for a kissing scene inside a temple, let’s not forget that in Kathua, Asifa was gang-raped & murdered in a temple, and thousands of Hindus including #BJP Ministers had marched waving Tricolor in support of the rapists. Purity, Sanity! My foot.” a twitter user said.

Check out some of the reactions regarding the same :

With this Boycott #Netflix bullshit for a kissing scene inside a temple, let's not forget that in Kathua, Asifa was gang-raped & murdered in a temple, and thousands of Hindus including #BJP Ministers had marched waving Tricolor in support of the rapists.
Purity, Sanity! My foot.

BJP govt of MP objected to scenes in the Netflix series A Suitable Boy, in which a Hindu girl kisses a Muslim boy against the backdrop of a Hindu temple.

These 👇are the sculptures in Khajuraho temple premise in Madhya Pradesh pic.twitter.com/x7STAOCjMe

Why Ban Netflix, U all unsubscribe it, instead. U will watch every series on it but will cry Ban this Ban that on SM. Bring the Change in urself.

Why tf this nation wants to ban Netflix now? 😭
Every single day people in India wants to ban any other app. Bruhhhhh I'm tired gimme something interesting on trending. Pls.

everywhere on the walls of the very same temples and monuments

Renowned Chef Venkatesh Bhat who is participating in the most famous "Cooku with Comali" show as one of the judges, in a recent episode,...

Actor Nakhul’s Wife Shuts Down All The Trolls Which Criticized Her Height !! Here’s How Nakkhul Reacted !!

We all know that it is not that easy to avoid the attention of media and public for a well known celebrity. But have...

COURTESY : BUZZFEED 1You have nearly gotten into a fist fight with an auto guy over the rate 2You have wished horrible things on some auto...

The first single from Vijay and Nayanthara-starrer Bigil has hit the internet with a bang on Tuesday, July 23. This development comes after the...