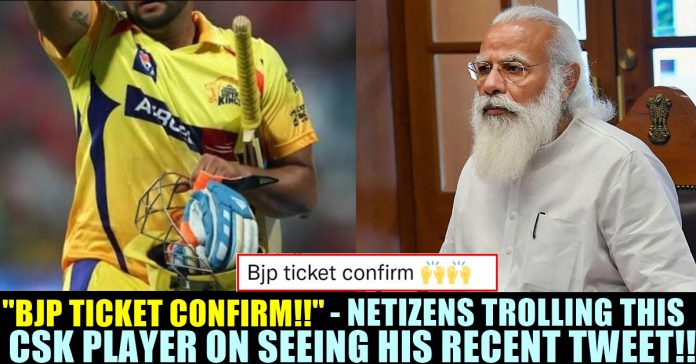 Former Indian Cricket Player, Suresh Raina has posted a tweet that painted him out as a supporter of BJP to the followers. In the tweet, Suresh Raina has appreciated the Union Government for vaccinating 1 Crore people in a single day. This tweet has made people think that the player might be an ardent supporter of the party.

Suresh Raina, a former Indian cricketer is active on social media. He actively posts tweets and pictures on Twitter and Instagram. Following the retirement of MS Dhoni on August 15, 2020, from all the formats of cricket, Raina announced his retirement too. He is currently playing for Chennai Super Kings in the Indian Premier League. He is fondly called ‘Chinna Thala’ by the CSK fans. Besides cricket, Raina along with his wife runs a Non-Governmental Organization for uplifting and fulfilling the basic sanitation and health necessities of women and children.

Raina has shared tweets making good remarks about the Government. On 27.08.2021, Raina has shared a tweet appreciating the government for vaccinating 1 crore people in a single day. With speculations about the onset of the third wave of Corona, Union and State Governments have been taking measures to prevent it. Many states have announced the reopening of educational institutions. This has also made many people get their doses at the earliest. The Union Government administered 1 crore doses in a single day. Raina in his tweet is all in praise hitting a huge number in a day.

Over 1 CRORE vaccine doses administered by India in a single day. This is beyond remarkable !!

The proficiency of our vaccine makers and the administrative capabilities of our health department deserves an applause too. 👏👏 #VaccinationDrive 🇮🇳🙌💉

This tweet of Raina has made many people suspect that he supports BJP and people have poured out their contempt for his tweet. Some people have asked why didn’t he talk three months back when India was suffering a lot during the second wave.

Health Department deserves an applause……?
I understand though, You want to remain in good books of your Masters. pic.twitter.com/rnoxuwGWip

Few people have said that a ticket to BJP and an alternate career is ready.

Previous articleFans Divided After CSK Tagged Manchester United By Uploading Dhoni’s Picture!!
Next articleIs It A Crime To Be A Muslim In This Country? Man Harassed For Selling Biryani Near A Temple

Rakhul Preet Singh Thrashed A Follower Who Abused Her Very Badly For Not Wearing Pant !!

Internet is a place where celebrities facing trolls and abuses from the common users in a daily basis and twitter is a medium which...

OFFICIALLY CONFIRMED : The Evicted Contestant Of This Week Leaked !! CHECK WHO !!

The most awaited Saturday's show of Bigg Boss completed telecasting successfully and Kamal Haasan surprised its audience by appearing with a clean shaved look...