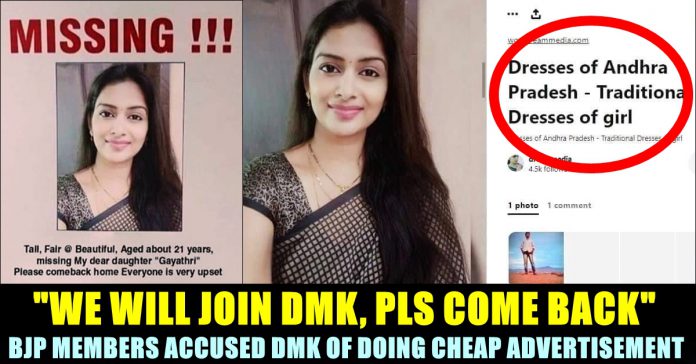 Political parties are all set to campaign for the upcoming Elections in India which will include by-elections to the Lok Sabha, elections to the Rajya Sabha, elections to state legislative assemblies of 5 states and numerous other by-elections to state legislative assemblies, councils and local bodies. Most recently, Tamilnadu BJP’s state leader L. Murugan said that BJP will come to power in Tamil nadu next year as a coalition government. “BJP will grab a place in Tamil nadu ministry as well” he said according to reports.

Now, the party members have came up with an accusation against the DMK party, saying that they attempted a cheap trick to advertise their party. SG Suryah, a politician of BJP party, posted a picture of a news paper cutting which shows a family trying to find their “missing” daughter.

In the “missing” advertisement, we can see a family trying to find their 21 year old daughter named as “Gayathri”. “MISSING, Tall, Fair, Beautiful, Aged about 21 years, missing my dear daughter “Gayathri”. Please come back home everyone is upset” the notice reads.

The family also sends a message to their daughter saying that they accepted her two demands. “We accepted both your demands, you can do the job you always wanted to do and your second demand that our family must join dmk via online programme Ellorum Nammudan is done. Athimbaer, Manni family too have joined. Please come back soon” the message says.

SG Surya of BJP added another picture of the same woman posing as a Andhra Pradesh based model for a clothing firm.

Followed by this tweet of SG Surya, several other supporters of the party accused DMK party of doing fake advertisements to grab Brahmin supporters.

Comment your views on this accusation of BJP members against DMK !!