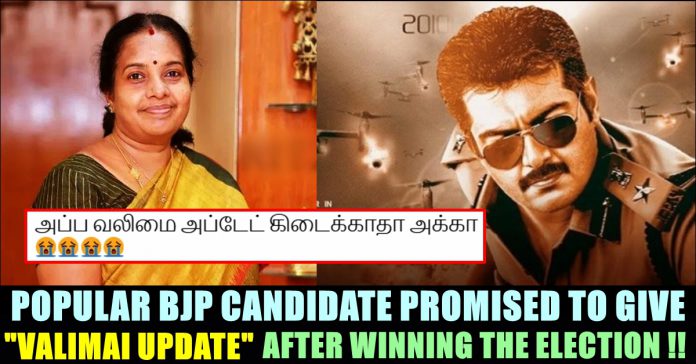 While the political parties of state Tamil nadu busy impressing people with their promises to win the upcoming election, BJP candidate Vanathi who is contesting in Coimbatore South has promised to get “Valimai” update for Thala fans after winning in her constituency. She is going to face “Makkal Needhi Maiam” president Kamal Haasan in the upcoming poll.

Tamil nadu assembly election is nearing and all the political party members in the state are encouraging citizens to vote for the deserving candidates. Campaigns across the state are being progressed with political party leaders making various kind of promises on the developments in the state to make people vote them to the power. Now, BJP candidate Vanathi Srinivasan has made an unique promise to cover the votes of the fans of actor Ajith kumar. Through one of her tweets, she promised to get Valimai update after winning in the upcoming election.

Since the release of Ajith kumar’s “Nerkonda Parvai”, fans of actor Ajith didn’t see a single release. The film got released on 8th of August 2019 and did good in the box office. However, the limited number of action sequences that took place in the court room drama made fans to crave for the next film of him. It was announced that director H. Vinoth is going to direct Ajith again and fans became happy as the filmmaker is known for his intriguing narratives.

Titled as “Valimai”, the film is being produced by Boney Kapoor under his production banner “Boney Kapoor production”. Principal photography of “Valimai” began on 13 December 2019 at Hyderabad. Unfortunately, shooting of the film was suspended in March 2020 due to the COVID-19 pandemic, but resumed in September. It was reported that Valimai is going to get released by the third week of November 2020 coinciding with Diwali. However, the release has been delayed indefinitely due to the COVID-19 pandemic.

Fans of the actor who are eagerly waiting for the release of the film got extremely upset and requesting for a trailer or teaser update from the film crew. They could be seen expressing their emotions in the comment section of every tweet of the producer. They also kept asking update from the makers by trending hashtags in the micro blogging social media platforms in a constant manner.

Acclaimed celebrities and sports personalities started receiving “Valimai Update” tweets from the fans of Ajith kumar. Recently, when Prime minister Narendra Modi made a visit to Chennai, fans asked “Valimai” update to him as well and it is notable that they made similar demand to Tamil nadu chief minister Edappadi K Pazhaniswamy.

Despite of the request of actor Ajith kumar, now a fan asked “Valimai update to Vanathi Srinivasan and to our surprise, she replied to him in a positive way. “Valimai film’s update will reach you people as soon as I win the upcoming poll brother” she said in her reply tweet.

Vanathi Srinivasan, a RSS Ideologue is a Tamil politician and lawyer. As a lawyer, she has practiced in Chennai High Court since 1993. She is currently serving as the National President of the Women’s Wing of the Bharatiya Janata Party. She who contested in 2011 & 2016 Tamil Nadu State Assembly election as BJP candidate, is also a former state secretary of BJP Tamilnadu and served as board member of Central Board of Film Certification.

Previous article“He Will Live Through His Films” – Entire Film Industry Mourned For The Demise Of Director SP Jananathan !!
Next articleFan Proposed To Marry VJ Anjana !! Check Her Reply