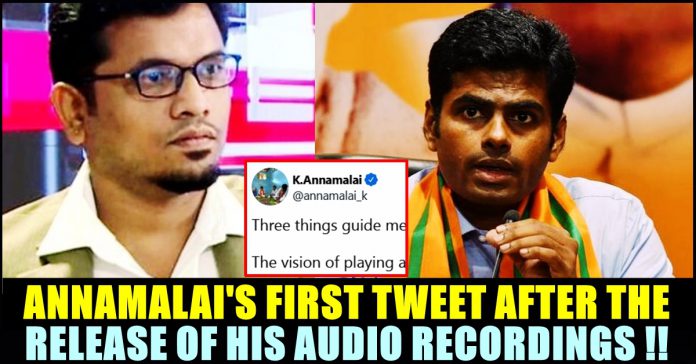 Tamil nadu BJP leader Annamalai came up with a tweet during the evening of Thursday after journalist Madan Ravichandran released a series of his audio recordings in his youtube channel. Through the tweet, Annamalai talked about the three things that will guide him now and in the future. However, the tweet garnered enormous number of reactions, criticizing the BJP leader for keeping mum about the K.T Raghavan issue and for the contradictions between his press statement and the recent audio recordings that were released by Madan ravichander.

Madan Ravichandran who leaked the video of BJP secretary K.T Ragahvan, came up with the audio recordings of Tamil nadu BJP leader K Annamalai who released a press note saying that the video of K.T Raghavan was not shown to him. Madan, while releasing the video of K. T Raghavan, said that he is releasing the video with the knowledge of Tamil nadu BJP leader Annamalai. However, in the press note, Annamalai said that Madan never showed him the video and the only message he sent to the youtube journalist, is “Do it as per your wish”.

He also extended his support to the senior BJP secretary who caught into the trouble, through his press note. Now, in a way of proving his entire press statement wrong, Madan released a number of BJP leader Annamalai’s audio recordings which are going viral in the micro blogging social media site. The audio recordings, evidently proves that Annamalai had a brief conversation with Madan Ravichandran regarding the video and about ruining the political career of K.T Raghavan.

Madan, in his video, says that Annanmalai asked him to release the video of K.T Ragahvan in person. “That Whatsapp chat screen shot which I showed is just a reference. But Annamalai asked me to release the video in person, not just through message.” Madan Ravichandar said in the 40 minute long video. The video also contains several other audio recordings of the Tamil nadu BJP leader.

Annamalai could be heard saying that he doesn’t have the courage to negotiate with the woman who is associated with the project. On hearing Annamalai saying that he changed the door which he stays into transparent after becoming the BJP leader of Tamil nadu, Madan questions whether BJP members who had non-transparent doors committed mistakes while being inside the room. “I never allowed any woman to enter my room alone. Be it Gayathri Raguramm or Khushbu, I never met them alone inside my room” K Annamalai of BJP could be hear saying in the audio recording released by Madan.

“BJP is a fantastic place. You have to be patient, you should be calm even if you talk like a fool.” said Annamalai who also added that Amit Shah gave him all the rights above some of the senior BJP personalities. In one of the audios, Annamalai says that he didn’t make the press release but a separate team works on it. Madan also accuses Annamalai of bargaining with him on releasing the video. At one point, Annamalai could be heard asking Madan how much will it cost for him to run Madan Diary youtube channel and offers him to give money.

While the video was trending in Twitter, Annamalai came up with a video saying “Three things guide me & will continue to guide me. The vision of playing a small part wherein @BJP4TamilNadu coming to power The pride of being a simple ‘Thondar’ of this great party that is built on countless people’s sacrifice Nation first always and every time! Jai Hind”

Three things guide me & will continue to guide me

Nation first always and every time!

Hashtag “Annamalai” is trending in twitter with 20k tweets with reactions criticizing the BJP leader. Check out some of them below :

The most disturbing fact about Annamalai expose is how he's concerned only about the women of his party and how he would protect the harasser if the affected women were not from his party.

Imagine the situation of non BJP women if BJP ever gets to form the govt.

Will you/the party be filing a police complaint? Damage is already done. Trying to continue to negotiate was/is a bad idea. Take the legal route.

I repeat it again.. @annamalai_k will be an big embarrassment and disaster to @BJP4TamilNadu .

Previous articleForcible Sex Between Married Couples Is Not Rape? Bigg Boss Celebrity Thrashed Court’s Judgement!!
Next articleLakshmi Ramakrishnan Lashed Out At A YouTuber Who Said That BJP Men Are Targetting Hindu Women

Fans Comparing “Varisu” With This Tamil Movie After Seeing The Trailee!!

The most expected "Varisu" trailer released in the YouTube channel of Sun TV on 5PM of Wednesday. The 2 minute 29 second long trailer...

Being a kid of an universally celebrated personality might look cool from outside but what they are going through in their day to day...