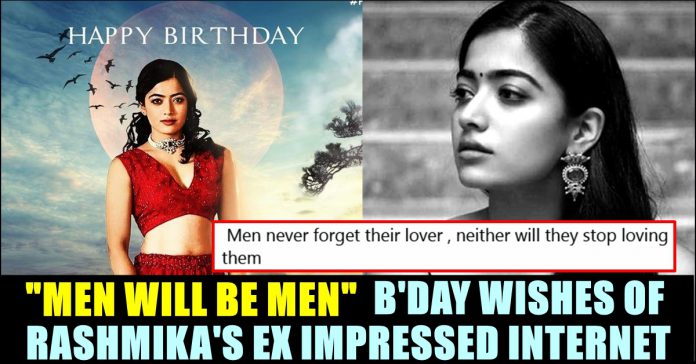 South Indian sensation Rashmika Mandanna who recently got debuted in Tamil through Karthi’s “Sulthan”, is celebrating her 25th birthday on Monday. Many of her colleagues and fans are wishing her the best on the special day and the wishes of Kannada actor Rakshith Shetty with whom Rashmika involved in a relationship in the past stood top among all of it. He shared an oldest video of the actress which was shot during her initial stage of her acting career and penned an emotional note to wish her. His post impressed many of his followers with people tagging Rashmika in it.

Rashmika Mandanna is one of the very few actress who got fame and place in the hearts of many fans in a very short span. Despite being part of very few films, the number of fan pages in social media that emerged for the actress is sky level.

Rashmika Mandanna and Rakshit Shetty fell in love with each other on the sets of “Kirk Party” and got engaged in the 2017. However, they called off their engagement due to compatibility issues, according to reports. As soon as the news broke on the media, the “Geetha Govindtham” actress was subjected to lot of online trolls and abuses. During a film promotion, Rakshit requested the fans not to target her.

“You all have formed opinions about Rashmika. I don’t blame you because that’s how it is projected. I have known Rashmika for more than two years and I have known her better than any of you. Please stop judging her. Please let her be in peace” Rakshit told media during the end of 2019.

Now, while wishing on her birthday, Rakshith added her audition video and wrote “sharing this beautiful memory of yours from the Kirik Party audition. You have travelled so far since then, chasing your dreams like a real warrior. Proud of you girl and Happy Birthday to you. May you see more success”

Sharing this beautiful memory of yours from the @KirikParty audition. You have travelled so far since then, chasing you'r dreams like a real worrier. Proud of you girl and Happy Birthday to you. May you see more success 😀🤗 @iamRashmika pic.twitter.com/6M1rBCQnee

On seeing this tweet from him, many of his fans dropped positive comments and tagged Rashmika to make her see it.

This is so cute!🥰
Men never forget their lover , neither will they stop loving them

@iamRashmika U Missed a 💎 😀
💯% @rakshitshetty Sir Will Get A Kohinoor 🤘

“Ahhhh.. I remember this sooooo clearly.. thank you so much, means a lot” replied Rashmika on seeing this tweet of Rakshith.

Ahhhh.. I remember this sooooo clearly.. thankyou so much @rakshitshetty 😁 means a lot. 🤗 https://t.co/06OxHdzpn2

A series of pictures that shows actor Vijay who is fondly called as Thalapathy by his fans and former Indian captain and current captain...