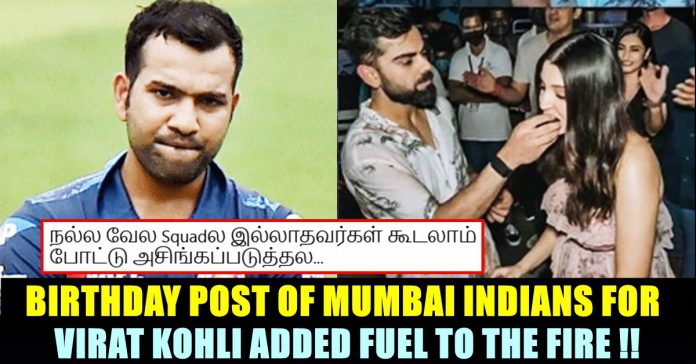 Entire country is wishing Virat Kohli, a very happy birthday as the Indian skipper is celebrating his 32nd birthday today. Pictures and videos of himself celebrating the special day with his wife and Bollywood actress Anushka and with the team members of Royal Challengers Bangalore are doing rounds in social media platforms.

In one of the clips, Virat is seen cutting his birthday cake as everyone around him sings ‘Happy Birthday’ and claps. Anushka, who stands by his side, feeds him the first piece of cake, after which he feeds her a piece. He then kisses her on the forehead and gives her a hug.

Other videos showed the cricketer getting cake smeared on his face by his RCB teammates. It is a double celebration for Kohli and RCB team as their team made it to the playoffs this time. It is also notable that Anushka and Virat Kohli are expecting their first child.

From legendary cricketer Sachin Tendulkar to Telugu cinema Superstar Mahesh Babu, many people wished the seasoned cricketer for his birthday. Social media handles of IPL teams also wished him on this special day. However, the post uploaded by the twitter handle of Mumbai Indians disappointed their own fans.

Majority team’s social media handle wished Kohli by uploading a picture of him with their team’s captain. Check out their posts below :

Birthday wishes go out to the India and @RCBTweets skipper. 🇮🇳🎂

P.S. We need to talk about ABD, @imVkohli. 😒#HappyBirthdayViratKohli pic.twitter.com/cfxkPjOkXs

(2/2) No, it's not a mistake. We just converted the one into a two. Super Birthday to the one and only Virat Kohli. #WhistlePodu #Yellove #ViratKohliBirthday pic.twitter.com/312dgFNzYK

Meanwhile, Mumbai Indians, while uploading the birthday post of Kohli, added a picture of Kohli and Hardik Pandya and wished the Indian captain for his birthday. “Happy birthday, Virat Kohli” read their twitter post’s caption.

On seeing Hardik Pandya instead of Rohit Sharma in the post, fans smelled something strange and started trolling the admin of the social media handle for not uploading appropriate picture. Some even asked whether he needs some pictures of Rohit and Virat together. Few fans went one step ahead and confirmed that there is a rift exists between the team management and the captain.

Worst bro… it's not good for Indian Cricket. If there is anything!!

Send him some pics .It looks like he doesn't have one.

If you don't like him, no need to wish.

Ps: A simple google search will give many photos of Rohit & Virat. https://t.co/TgpmMtn2yn

A controversy took place after Rohit Sharma’s name excluded from the squad of team India for the upcoming Australia tour. The cricketer’s hamstring injury caused his exclusion from the squad. His exclusion created huge controversy despite BCCI’s statement which said that his health update will be monitored thoroughly. “The BCCI Medical Team will continue to monitor the progress of Rohit Sharma and Ishant Sharma.” they said in their tweet.

Surprisingly, on the very same day of squad announcement, official twitter handle of Mumbai Indians came up with a video showing Rohit Sharma practicing in the nets, fuelling the speculations of Rohit’s injury and seriousness. Watch the video below :

On seeing this video, fans believed that Virat Kohli and BCCI intentionally excluded Rohit from the team. Read : “Dirty Politics Of Virat Kohli & BCCI”- Fans !! Now, this birthday post from Mumbai added fuel to the fire. Comment your views !!

“Is This A Question Asked To A Legend ??” Internet Slammed Popular Youtuber For His Attitude Towards Kamal Haasan !!

The most awaited promo of Black sheep digital awards 2020 released on youtube two days ago and impressed the online audience as many of...

A 39 year old Food Delivery agent named Raees Sheikh got arrested after a 19 year old college student registered a complaint against him...

Bill Gates, co-founder of Microsoft and his wife Melinda Gates made the headlines across the globe by announcing about their divorce after 27 years...