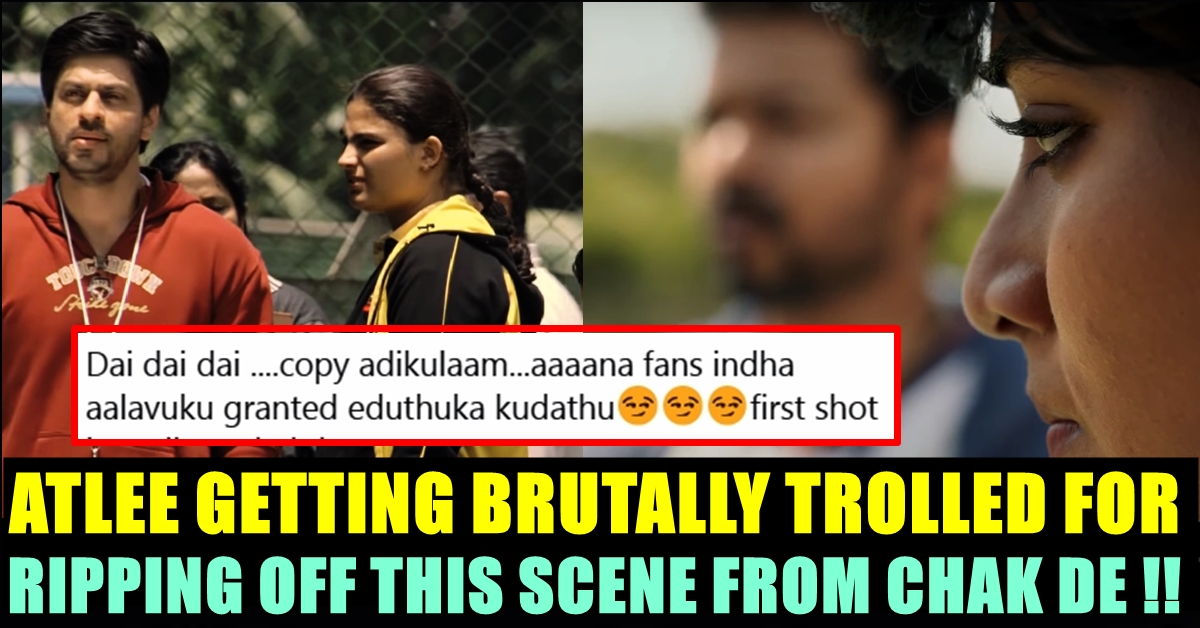 The most awaited trailer of Bigil released and left the Internet exploded. The film which is director by Atlee, has actor Vijay in the lead in three different get ups. Produced by AGS Entertainements, Bigil has Nayanthara as lead lady. Kathir, Vivek, Yogi Babu, Indhuja Ravichander, Jackie Sheroff, Daniel Balaji are some of the other actors taking part in the film.

However, as soon as the trailer released, few fans in social media are accusing the filmmaker for copying a scene from “Chak De India”, a 2007 blockbuster of Shah Rukh Khan. The trailer of Bigil starts with the women football team players wishing their coach, actor Vijay. When he receives wishes from Indhuja, Vijay repeatedly demands her to shout louder.

Check out some of the reactions for the similarity between the scenes of Bigil and Chak De India :

Dai dai dai ….copy adikulaam…aaaana fans indha aalavuku granted eduthuka kudathu😏😏😏first shot is apdiyay chakde
Anyone can @ me I don't care a bloody fuck
U build it up like this and as a vj fan knwin Atlee am waiting for the trailer…Ada cha…
Idhu dhaan best writing 😖

Is Bigil a Chak de remake ? Only diff I can see in Bigil is that the game is football whereas it was hockey in Chak De. #BigilTrailer Anyway all the best ! Trailer has come out well. @yrf https://t.co/ZeKhPY1nfH pic.twitter.com/IqlEtvMGaD

However, it is too early to judge a movie with its trailer. Let us wait till Diwali for the movie to get released. Comment your views on the trailer of Bigil !!