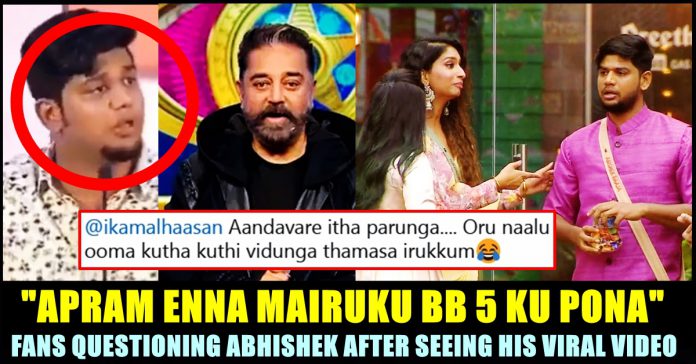 An old video of movie reviewer Abishek Raaja trolling Bigg Boss show’s Kamal Haasan in a public event is doing rounds in social media platforms, making fun of the host as he himself entered the ongoing show as one of the participants. In the video which is trending, Abishek could be seen saying that he belongs to the Bigg Boss generation where people are involved in doing stints to become chief minister despite of knowing that they are being recorded by camera.

Abishek Raaja entered the Bigg Boss house with a dance performance and mingled with his co-contestants within less than a day. He joined Raju Jayamohan in bathroom cleaning team and is actively involved in doing tasks. He expressed his opinion about Cibi, Niroop and Abhinay Vaddi in the second day of the show. He also got emotional while talking about his mother who is in a dejected state ever since the demise of her husband.

Abishek Raaja who interviewed almost all the top celebrities of Kollywood, has a separate fan following for the way he reviews movies. He also acted in a film named “Imaikaa Nodigal” as a best friend of Raashi Khanna. With immense passion for cinema, Abishek has been reviewing movies for years. His 2 minute reviews in “Fully Filmy” is pretty much famous and he grabbed the limelight after roasting Raghava Lawrence’s “Motta Siva Ketta Siva” film.

He is currently reviewing movies in his own youtube channel “Open Panna” where he also interviews celebrities. He is actively analysing the movies of Kollywood through his youtube channel and has been giving updates about the same industry through his official twitter handle. His interviews with celebrities such as Gautham Vasudev Menon, KV Anand, Soori, Vimal and few others became a subject to severe online troll.

Now, a video of the movie reviewer talking ill about the reality game show is going viral in social media platforms. In the video, he could be seen saying “I don’t believe things what I see through my bare eyes as I belong to a generation where people acting to become Tamil nadu chief minister in front of camera”

Among the many who trolled Abhishek Raaja for entering Bigg Boss house, after talking ill about the show, actress Indraja who is known for her stint in Vijay’s “Bigil” movie, trolled Abhishek asking why he went inside if he feels this way about the show. Tagging his official Instagram account, she asked “Why did you go inside then ?”

Check out some of the other reactions for the same video below :

Previous articleVanitha Replied To A Hater Who Mocked Her By Uploading Peter Paul’s Picture On Her Birthday !!
Next articleVikatan Thrashed Mohan G’s “Ruthra Thandavam” !! Check Out The Mark They Provided For The Film

Video of actress Shobana who shared screen space with Superstar Rajinikanth in the evergreen "Thalapathy", opening about how Rajinikanth surprised the crew members of...

Chief minister Edappadi K Pazhaniswami announced relief fund for the family of the deceased who got killed by two men of the ruling party....