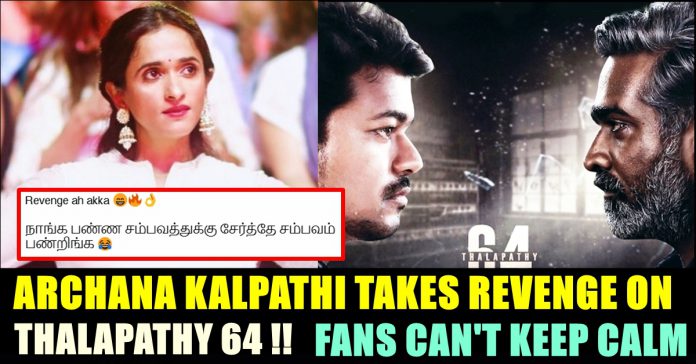 Vijay’s Bigil hit the screens on 25th of October and was watched by millions of people. No words could describe the craze level that was created by Bigil film. Director Atlee, who himself a biggest fan of actor Vijay, carved the actor inch by inch it seems. The film which marks the third collaboration of Atlee and Vijay, has actor Vijay in the lead in three different get ups.

The film was produced by Kalpathi S. Aghoram under the banner AGS Entertainment. “Bigil” revolves around a youngster who is an aspiring football player, diverts himself from his dream to take revenge of the murderers who killed his father. He then forms a women football team to achieve his father’s dream of providing an identity to his slum through excelling in football game.

The film became a huge blockbuster and almost ended its theatrical release. As we all know actor Vijay got busy working for his next film which is tentatively titled as “Thalapathy 64”. The upcoming film has commenced with a customary pooja in Chennai with Vijay, Vijay Sethupathi, Malavika Mohanan and Shanthanu Bhagyaraj and the rest of the crew in attendance. Directed by Lokesh Kanagaraj, the film is touted to be a gangster flick with Vijay Sethupathi playing the villain.

Fans of the actor are very much active in Twitter and they have a habit of demanding an update every now and then from the producers of his upcoming film. We couldn’t forget the trauma Archana Kalpathi went through while producing Bigil. Various hashtags including #UpdateViduArchuma trended nationwide during the post production of “Bigil”. However, Archana Kalpathi managed to release the film successfully with updates in regular interval.

Being an ardent fan of Thalapathy herself, Archana, in one of her promotional interview for Bigil said that she would demand for update along with the fans for his next film. Now as Thalapathy 64 is on floors, Archana decided to take her revenge it seems. She posted a tweet demanding an update from the team of Thalapathy 64.

“Will be great if we get a motion poster / first look date or some update #LetsAskforThalapathy64Update @XBFilmCreators @Jagadishbliss 😊😊😊” read the tweet of Archana. Check out her tweet here :

On seeing this tweet from the producer, many fans of the actor got extremely excited and started saying that she is taking revenge. Check out some of their reactions here :

Comment your views on this massive transformation of Archana Kalpathi from a producer to Fan girl !!

Previous articleAmritha Got Devastated On Seeing This Video !!
Next articleCourt’s Judgement In A Molestation Case Creates Furore !!

“More Than 20 Women Complained Against Him” – Chinmayi!!

Based on the comment made by singer Chinmayi on VJ Archana's post, a follower warned men of not meeting Chinmayi personally alleging that she...