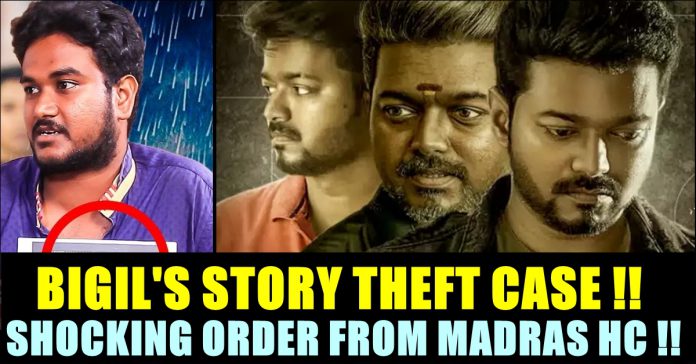 BIGIL Not To Release On Diwali Because Of Assistant Director KP Selvah ??

Bigil is one of the most anticipated films of the year 2019 and is expected to hit the screen on Diwali day. In a way of adding fuel to the expectation level, the makers of the movie released the first ever official trailer of “Bigil” only to set the Internet on fire.

Actor Vijay who has a huge fan base in Tamilnadu, is expected to be seen in the third collaboration with Atlee after Theri and Mersal. Composed by A.R Rahman, having Nayanthara in the female lead, the film is one of the highly anticipated film of the year which is expected to be released on Diwali day.

But now things is not going in the right direction for the Vijay-starrer it seems. Unlike other Vijay movies which would get into controversy during its release time, BIGIL is facing controversies since the first day of shoot. Starting from junior artist accusing director Altee’s crew of physical harassment to Assistant director KP Selvah accusing the makers for plagiarism, the movie is facing controversy after controversy.

Selvah also said that he met director Atlee with his manager. On November 2, Atlee and his manager met Selvah in the Starbucks which is located opposite to Atlee’s office.

Check out some of the reactions for this news :

Meanwhile Bigil movie which completed its censor has got U/A as per reports and the run time of the sports drama is 2 hours and 58 minutes.

Comment your views on this problem faced by Bigil crew !!

Previous articleFan Questioned Cheran For Not Meeting Madhumitha !! Here’s How He Replied !!
Next articleShane Watson’s Official Instagram Account Got Hacked !! Check Out His Reaction !!

“Jai Bhim For Best Picture, Trust Me On This One” – Oscar Nominations To Be Out Today !!

Nominations for the 94th Academy awards is all set to be announced on Tuesday, February 8. A total of 23 categories of Oscars 2022...