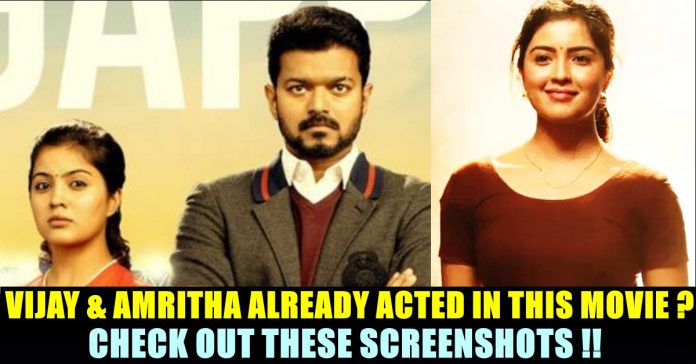 Apart from Vijay, Nayanthara, Yogi Babu, Bigil had 15 girls as a football team squad. Indhuja Ravichander, Varsha Bollamma, Amritha Iyer are few of the player who were given importance in the movie. Amritha played a role called as Thendral who is the captain of the state team.

Before Bigil, Aiyer made her film debut with Padaiveeran, where she played the role of Malar. She was later seen playing one of the female leads opposite Vijay Antony in Kaali. But only after essaying the role of “Thendral”, Amritha became the darling of social media. The actress who is very much active in Instagram, enjoys more than 4 lakh followers in the social media platform.

Now to our surprise, another fact about the filmography of the actress has surfaced which left the fans of actor vijay in awe. Amritha has already appeared in the movie “Theri” as one of a friend/cousin of Samantha. What’s more surprising is that the actress had combination shots with the “Bigil” protagonist in “Theri” itself.

Check out few of the screenshots from Theri below :

Atlee in a recent interview, requested the upcoming filmmakers to keep an eye on talents like Amritha, Varsha Bollamma and the other female actresses in his film “Bigil” and said that he believes that they have the potential to become leading heroines of Tamil cinema such as Samantha and Kajal Agarwal.

Amritha seems to have good bond with Nayanthara as well. Recently she thanked the actress for the present she gifted on her birthday. Amritha even thanked her for being an inspiration in her Insta post.

Comment your views on the Amritha becoming a top heroine in tamil film industry !!