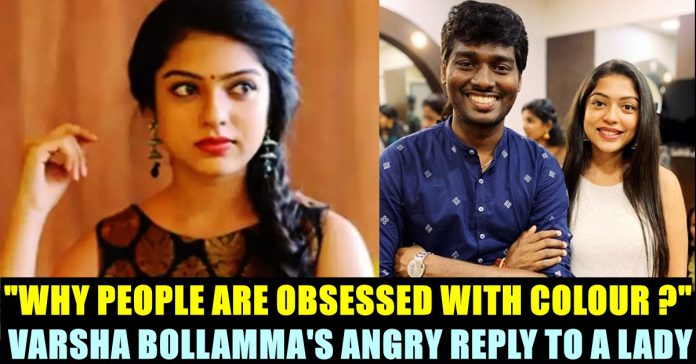 Varsha Bollamma, one of the girls who played as food players in Vijay’s “Bigil”, is pretty much active in social media platforms, updating about her daily routines. The Kerala based actress, initially rose to fame among Tamil audience for her dubsmash videos through which she imitated popular actress Nazriya Nazim. After appearing in “96” and later gained widespread acclaim after acting as a pregnant football player. Now, the 25 year old actress, shared about her encounter with a lady who questioned about the race of her dog.

Varsha Bollamma is having a pet puppy named as Hachiko. Recently, when she was taking him for a walk, a lady asked her why Varsha bought a black one when there are other cute colours out there. The “Bigil” actress said that she felt so disgusted on hearing what the lady said.

Check out the screenshot of the actress’s story here :

Recently Varsha Bollamma shared a post narrating how her little Hachi recovered from a deadly disease PARVO disease. The emotional post contained a week’s struggle of the actress trying to cure him from the virus with the help of a doctor.

Meet Hachiko! 🐶💗 The newest addition to our family. The day Hachi came home, he stole our hearts instantly. He was super active!! 3-4 days later he got lazy. He would move only to eat food. He stopped playing. Having no prior experience with puppies we assumed he was bored. 2 days later he started puking. We thought it was because he had eaten something due to his teething. The next day the puking increased. We called a vet and he asked us to give him some drops. It din help. We placed food infront of him and he refused to eat. That’s when we panicked. His tail would usually wag at a speed of 200 km/hr looking at food. We rushed him to the vet and hoped it would just be a case of food poisoning. The vet ran some tests and there it was, the scariest sight! Hachi tested positive for PARVO VIRUS. The deadliest virus for puppies with a mortality rate of 90% when left untreated. Our little sunshine was in danger. Here’s the thing about Parvo Virus – there is NO cure!! Your vet will offer your puppy supportive care over the course of the illness, treating vomiting,diarrhea, dehydration, and making sure that your puppy gets adequate nutrition. If your puppy is strong enough to fight the virus, he survives! We started his treatment.Hachi grew really weak; puppies get stressed and depressed during the whole process! We gave him all the love and care. We assured him that he was a good boi and we would save him no matter what! On the 1st day of treatment Hachi continued puking, then he started losing a lot of weight. Day 2 and 3 the puking became worse, and on Day 4 he puked about 15 times. The vet said Hachi might not survive and that shattered our hearts! But we DID NOT GIVE UP! We continued his treatment. And then it happened! He did not puke the ENTIRE night, that’s the first sign of recovery. Best part was he started wagging his tail (50km/hr :’))and this happened after 5 days of complete pain! Who knew this little guy could make us cry and laugh within a week of his arrival! He is in recovery now and we are hoping for the best #parvosurvivor #parvo

On the work front, Varsha who was last seen in the telugu version of “96” is expected et committed it more films post lockdown. Comment your views on the reaction of Varsha when a lady questioned the colour of her pet !!