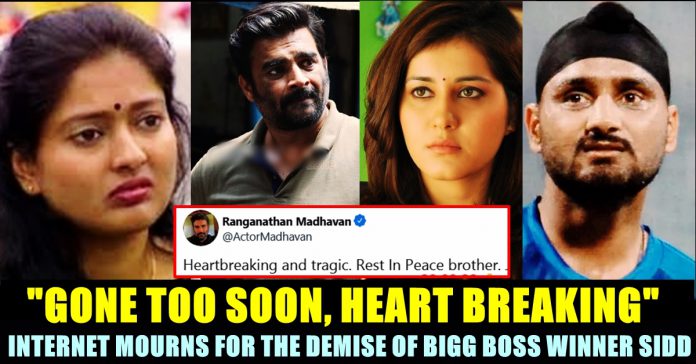 On Thursday, Actor Siddharth Shukla who won the title Bigg Boss season 13 passed away and the news shook the entire Internet. According to an official statement of Mumbai’s Cooper hospital, the 40 year old suffered a massive heart attack during the wee hours of Thursday. He is survived by his mother and two sisters. “He was brought dead to the hospital some time ago”, said a senior official of Cooper Hospital, according to reports.

He was last seen as “Agastya” in “Broken But Beautiful 3”, a show of Ekta kapoor. The actor recently announced his film “SilSila SidNaaz Ka” with Shehnaaz gill who is believed to be his girlfriend. The duo met each other inside the Bigg Boss house during the 13th season and are popularly known as “Sidnaaz” among fans.

Apart from Bigg Boss, Siddharth is known for his roles in television serials such as “Balika Vadhu” and “Dil Se Dil Dak”. His presence in popular reality shows such as “Jhalak Dikhhla Jaa 6”, “Fear Factor : Khatron Ke Khiladi” gained in fame. he enjoyed a huge fan base in online platforms as well as among Television audience. Many fans and celebrities flooding the social media platforms by uploading condolence post for the popular actor.

Cricketer Virender Sehwag said “Another reminder of how fragile life is. Heartfelt condolences to #SiddharthShukla ‘s family and friends. Om Shanti” by uploading a picture of the actor whereas many other fans came up with emotional notes to pay last respects to Siddharth Shukla. Check out some of the reactions below :

Another reminder of how fragile life is.
Heartfelt condolences to #SiddharthShukla 's family and friends.
Om Shanti pic.twitter.com/zTinZmyaJ5

Shocked beyond words!! Gone toooooo soon…. Condolences to his family, loved ones. – He was loved by millions. #SiddharthShukla you will be missed – rest in peace brother. Om Shanti 🙏🏽 https://t.co/gvttNVDHxh

It’s shocking to hear about the sudden demise of #SiddharthShukla 🥺
My heart goes out to his family and his army of fans! Life is so unpredictable! Rest in peace.

My heart and brain is numb right now……. Can’t believe……. Rest in peace Siddharth Shukla 😔🙏🏼 Condolences to his Family and Fans 💔

Totally Numb! This is beyond shocking! Life is so unpredictable. May his soul rest in peace🙏🏻 #SiddharthShukla pic.twitter.com/OjvCBDXN94

Lets us pray for the soul of Shukla to rest in peace !!

Previous articleSonia Agarwal Lashed Out At Media After Seeing This News About Her
Next articleWoman Continues To Accuse Arya Even After The Arrest!!

A video that shows Myna and Ayesha talking about Manikandan using a shoe that has Bluetooth connectivity is trending among the followers of the...