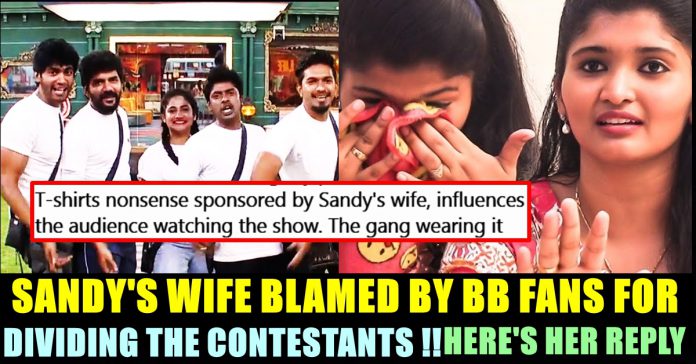 As we all know, Sandy is one of the mischievous contestant in the Bigg Boss house. Being one of the very few contestants who is loved by almost every contestant inside the house, Sandy doesn’t got nominated for eviction till 50+ days. He doesn’t involved in any verbal spat with the contestants until “Native task” in which he was confronted by Madhumitha.

The show which is nearing its finale facing many twist and turns as contestants are having misunderstanding within themselves. Recently an issue raised inside Bigg Boss house because of the T shirts sent to Sandy & co.

After several evictions, a group has formed inside the house which included Kavin, Sandy, Mugen, Losliya and Tharshan. They started roaming together and was seen spending happy times. On seeing them together netizens started terming them as “Fab 5”, “Boys Gang” etc. In a way of encouraging them, Sandy’s wife Sylviya sent similar t-shirts inside Bigg Boss house which carried wordings such as “We Are The Boys” and “Gurunatha”.

This raised as an issue inside the house in several occasions as they are forming a separate group inside the house which is supposed to be one family. Cheran expressed his disappointment on this during the Debate session. Following this social media users also started blaming Sandy’s wife for dividing the housemates by sending only 5 t-shirts.

Check out some of the posts that blamed sandy’s wife :

Sherin broken totaly when she saw the group uniform dresses only for the 5 ppl inside.. It might also hurted Cheran and other HMs when this gift arrives from Sandy’s wife.. But @vijaytelevision dnt understand how it wil hurt othr HMs.. Painful #Biggbosstamil3 @EndemolShineIND

Not a Cheran fan, but he rightly pointed out this same T-shirts nonsense sponsored by Sandy’s wife, influences the audience watching the show. The gang wearing it around the house was a power move. Good on Cheran to realise this #BiggBossTamil3

First of all, why did Sandy’s wife send in those t-shirts/hoodies?? So unnecessary #BiggBossTamil3

Now, Sandy’s wife replied to these allegations by posting a series of Instagram stories. She says that she sent 6 t-shirts for Sherin too but the 6th one was unused. She also regretted for not sending 8 shirts for all the contestants. She also apologized to Sherin and promised to make it up while meeting in person. Check out the stories she posted here :

In 2017 Sandy married Sylvia, his longtime girlfriend. The couple blessed is with a baby girl. Sandy initially choreographed Viraivil Isai, Ivanukku Tanila Gandam, Vaalu in 2015. Apart from that he also choreographed Saagasam, kakakapo, Jambulingam also Jithan 2, Gethu during the year 2016 and his latest one is with the superstar Rajinikanth’s Kaala movie.

What do you think on this clarification made by sandy’s wife ?? Comment your views below !!

“Arrest Those Who Threatened To Kill Us” Sofia’s Father Wants Tamizhisai & Co To Be Arrested !!

State President of the Bharatiya Janata Party, Tamilisai Soundararajan was seen losing her cool at the Thoothukudi Airport on Monday and asking a police...

After going through a lot of trouble for acting in the widely watched court room drama "Jai bhim", actor Suriya landed in trouble again...

Director Naveen Called Out Tambras Leader Narayanan After Watching This Video Of Him !!