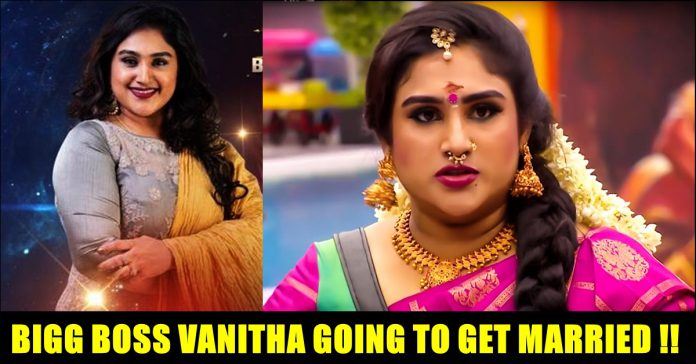 Vanitha Vijayakumar, eldest daughter of veteran actor Vijayakumar is going to get married on 27th of this month with the presence of her close friends and relatives. She who started her second innings in the media industry through Bigg Boss show in Vijay Tv hosted by Ulaga nayagan Kamal Haasan, went on to clinch the title in “Cooku With Comali”, a cookery show which had celebrities of Vijay Television as participants. Now, the actress is very much busy in making contents for her youtube channel “Vanitha Vijayakumar” through which she is keeping her 4 lakh plus subscribers engaged through her cooking related videos.

Vanitha Vijayakumar started her acting career in the year 1995 through a film named as “Chandralekha” in which she paired opposite to actor Vijay. She went on to expand her career in Telugu film industry through films such as “Hitler Brothers” and “Devi”. After marrying to Akash, a television actor in the year 2000, Vanitha stopped acting in films. However, the couple filed divorce in the year 2006 and the divorce got finalised in June 2007. At that time Vanitha had two children Vijay Sri Hari and Jovika Vijayakumar. Vijay Sri Hari is currently living with his father Akash after a lengthy child custody dispute in Madras High court.

In the year 2007, Vanitha got married to Anand Jay Rajan, a businessman. The couple gave birth to Jayanita Vijayakumar in the year 2009. However, they got divorced in the year 2012. During Vanitha’s participation in Bigg Boss show, Rajan reportedly filed a complaint alleging that Vanitha kidnapped their daughter Jayanita. After Jayanita confessed that she had come to Chennai with her own interest, Police refused arresting Vanitha, suggests reports.

It is also believed that Vanitha had a relationship with Dance choreographer Robert with whom she produced a movie named as “MGR,Sivaji,Rajini,Kamal”. The film failed to impress the audience as well as the critics. The duo ended their relationship after being a subject to controversy.

However, after her Bigg Boss stint, Vanitha gained a separate fan following for the way she handled the issues that are taking place in the Bigg Boss house between the other participants. She received an award for her “Guts and Grit” by Kamal Haasan. She is the only contestant in Tamil Bigg Boss history who got eliminated and made a come back within days as participant. She who won hearts of many viewers with her bold statements, gained more support just few days before her eviction due to the freeze task in which she spent some lovable time with her adorable daughters. The popularity she gained through the show helped her to win the title of “Cooku With Comali”. As she is busy producing contents for her youtube channel now, the actress also started reviewing movies.

Now, it has been revealed that Vanitha is going to get married for the third time to Peter Paul. The invitation suggests that the marriage ceremony is going to take place at their home on 27th of June.

Let us wish the couple to have a happy and healthy married life ahead !!

Actor Siddharth is one of the active social media user who raised his voice through it for every issue that is taking place. Known...