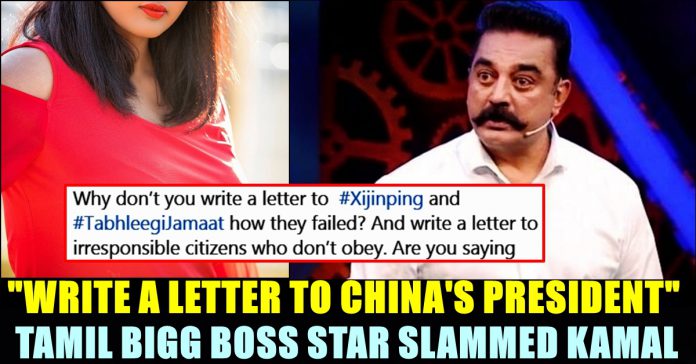 Former Bigg Boss contestant and BJP supporter Gayathri Raguramm slammed Kamal Haasan’s letter to Prime Minister Modi. Being a dance choreographer by profession, Gayathri is also a politician who has been supporting BJP through her tweets. After appearing in several movies as heroine and supporting actress, Gayathri Raguramm participated in Kamal Haasan hosting Bigg Boss show in 2017 as one of a contestant along with 13 other celebrities.

Now, to our shock, Gayathri confronted a statement of Kamal Haasan through her official twitter account. The “Viswaroopam” actor expressed his disappointment over the decisions being made by Prime minister Narendra Modi regarding the prevention of COVID 19, a deadly virus which killed more than 74,000 people across the world. Mentioning the “Diya lightening campaign”, Kamal Haasan asked Modi if the union government wanted to be a “balcony government only for the balcony people”.

He also asked why India took so much time to take appropriate action when the first case was reported on 30th of January. It is notable Modi announced 21 days lockdown on 23rd of March 8 pm with 4 hours left for the lockdown to be implemented. (Read : Kamal Haasan Raised Voice Against 9 PM Campaign When Other Top Actors Failed !!)

On seeing this open letter to Prime Minister Narendra Modi, Gayathri Raguram, through her tweets asked him to write letter to state government’s officials first before writing it to Prime minister Modi. She also asked him to write a letter to China’s president Xi Jinping and to the members of Tablighi Jamaat. “Are you saying Edappadi K Pazhaniswamy and Vijaya Bhaskar is failing? Write letter TN MLAs & MPs. if u have problem address it to the state gov first” she wrote in one of her tweet.

She even asked Kamal Haasan whether writing Modi ji is a fashion or trend. “Are u upset that everyone showed unity and u failed to do so? What’s bothering you?” she asked in her tweet and questioned which part in tamilnadu is not getting food.

Why don’t you write a letter to #Xijinping and #TabhleegiJamaat how they failed? And write a letter to irresponsible citizens who don’t obey. Are you saying @CMOTamilNadu @Vijayabaskarofl is failing? Write letter TN MLAs & MPs. if u have problem address it to the state gov first https://t.co/qlbuLk5Zll

Are the doctors failing? Are the police failing? Other workers? Which part in TN and area is not getting food? Don’t write blunt blank wague letters. I hope it carries details.

She continued to share tweets which slammed the thoughts and opinion of the MNM president. Comment your views on these replies of Gayathri Raguramm !!

The most expensive and biggest reality show of Tamil television forum, BIGG BOSS hosted by Ulaganayagan Kamal Haasan is in trouble, this time even...

The much-awaited contest between India and England got underway at the Old Trafford in Manchester on Tuesday. The visitors thumped the Eoin Morgan-led side...