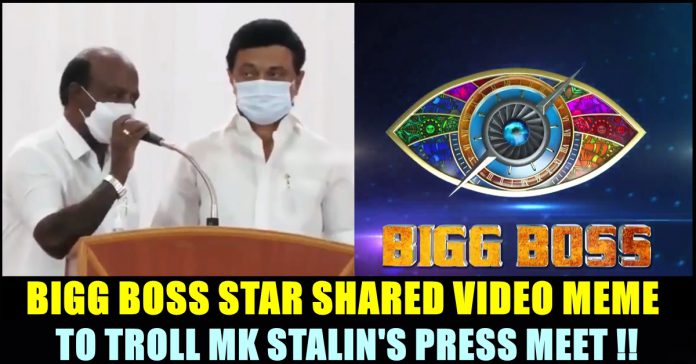 The Stalin led DMK won 125 seats with four from the MDMK, two from the MMK, one each from the TVK and KNMK winning on the DMK’s rising sun symbol. In total, the party succeeded in 133 constituencies out of 234. This is the sixth time a chief minister formed governance in Tamil nadu from the DMK party since 1967 as party founder C N Annadurai elected first to the post. Stalin’s father M Karunanidhi held the post thereafter.

Since getting crowned as the state’s chief minister, Stalin has been feeling the pressure from the party of oppositions. He is being criticized for the surging cases of COVID 19 virus in Tamil nadu as it became the state with highest number of positive cases for past few cases in India. Gayathri Raguramm of BJP party has been flooding her twitter timeline with tweets pointing out the flaws of the newly former DMK government.

On Saturday, she shared a video meme of MK Stalin allowing minister Ma. Subramainam and K.N Nehru answering to the press reporters and appreciated the meme creator by writing “Awestruck” as her caption. The video compared MK Stalin with comedy actor Vadivelu and indirectly denoted that he is stumbling to answer the questions of press reporters.

Earlier, Gayathri Raguram demanded Stalin to provide Rs. 1 crore as a compensation to the family members of frontline workers, in case of any lost lives. She also criticized Stalin allowing shops such as salons to function on Saturday and Sunday ahead of one week lockdown. “Worst part even the buses are open to spread more virus to the passengers.. one thing this state government is giving for free and that is COVID along with Rs. 4000 totally (prize money) for all the damages they are causing for Tamil Makkal’s life. No planning no leadership.” she said in one of her tweets.

Worst part even the buses are open to spread more virus to the passengers.. one thing this state government is giving for free and that is COVID along with Rs. 4000 totally (prize money) for all the damages they are causing for Tamil Makkal’s life. No planning no leadership.

Tamil nadu government has officially implemented complete lockdown in the state to prevent the spread of the COVID 19 virus. Chief minister MK Stalin who made the announcement after having a meeting with committee of health experts and the members of the legislature of 13 other political parties which includes the members of ADMK, Congress, said that a complete curfew has to be observed.

Previous articleAnikha Opened About The Scariest Love Proposals She Received !!
Next articleYouth Wants To Become A “Chair” For This Kollywood Actress !! Here’s Her Reply

A 22 year old youth named as Sudhakar stabbed his school mate Premalatha Puthagaram after getting rejected by her. She has been admitted at...