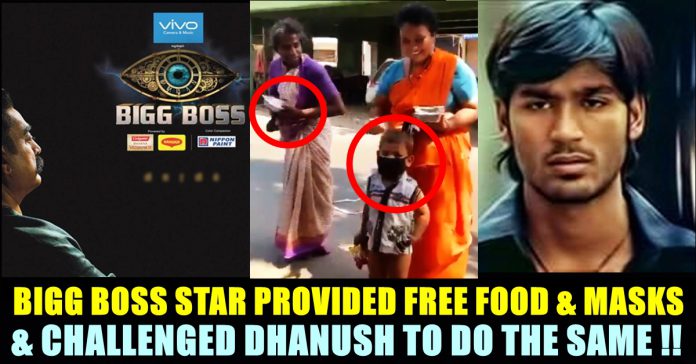 In this busy world where people have no time to look after themselves, Bigg Boss star and actor Danni provided free face masks and food for the poor and needy. He did it to complete a challenge made by his friend in Instagram. Government’s announcement of 21 days lockdown has turned the lives of people upside down. Many are glued to the Internet as they have no place to go and few people attempting to grow a good habit such as practicing yoga etc in these 21 days. Meanwhile Danni, without considering the risk of going out at this time, provided what he can to his fellow human beings.

These videos and pictures shared by Danni in his official Instagram story, shows him accepting the challenge of his friend to provide food for 60 people. He also helped people to wash their hands with hand sanitizer and he himself gave mask to them by wearing it in their face.

Antha manasu than ya kadavul 😘😍 pic.twitter.com/bqTaLRaiBh

Here’s the picture he posted before he was about to provide to the poor:

The most special part about his deed is, that the actor challenged number of influential people from his industry to do the same, in order to make this practice go viral which will help large number of poor people to get food and safety masks for free. He challenged actor Dhanush, Director Venkat Prabhu, actor Gautham Karthick, Music director Anirudh Ravichander, Director Venkat Prabhu, Actress Ramya Nambeesan and “Bigil” fame Reba John to complete the challenge. He mentioned their official Instagram id’s in his story to challenge them.

This practice will be followed by vast number of youngsters if any one of the celebrity Danny mentioned complete his/her challenge. However, we have to wait and see if it happens. The lockdown which ends on 14th of April is likely to extend as the growing rate of positive Coronavirus cases are increasing day by day. So far, 5,192 people in India got infected by the virus which killed more than 82,000 people all over the world. The only intention of Indian government now is to avoid community spread result of which they announced lockdown for the entire country.

Let us appreciate Danny for his kind and generous gesture during this crucial time !!