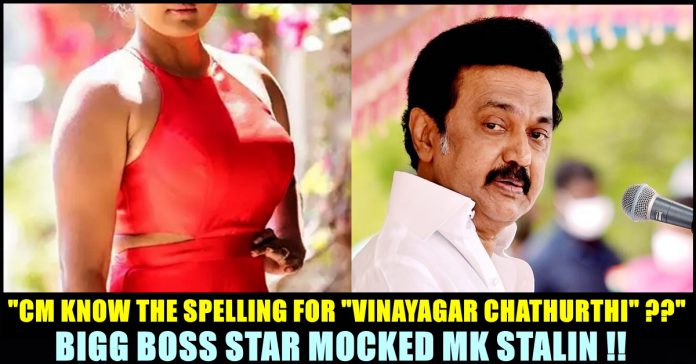 Actress Gayathri Raguramm who has been criticizing DMK leader MK Stalin ever since he took oath as the Chief minister of the state, wrote a letter to him recently to wish him for Vinayagar Chathurthi. She went on to mock MK Stalin whether he knows the spelling of “Vinayagar Chathurthi” or not as he hadn’t wished to the people of Tamil nadu for the festivel.

Vinayakar Chathurthi is a famous festival celebrated all over country. This year Vinayakar Chathurthi falls on 10.09.2021, a Friday. Along with central government, Chief Minister of Tamil Nadu M K Stalin has imposed restrictions for Vinayakar Chathurthi, considering the COVID 19 virus spread. To avoid gatherings the government has said that Vinayakar idols shouldn’t be dissolved in water. He has further said people should do the celebrations in their houses and keep their idols in the temples.

Earlier, Gayathri Raguramm uploaded a couple of tweets, condemning the announcement of MK Stalin. Now, she came up with a letter, wishing MK Stalin for the auspicious festival. Quoting a popular Tamil poem, Gayathri Raguramm, in her letter said “Vinayagar is the only one who could save Tamil language and Tamil people”

Further, she mocked Mk Stalin by writing “Does our Chief minister know the spelling for Vinayagar Chathurthi as he has never once wished us? just checked..” in her next tweet.

Does our Chief minister know the spelling for Vinayagar Chathurthi as he has never once wished us? 🤭 just checked..

Gayathri Raguramm is an Indian choreographer and actress who has been working in the South Indian film industry. The daughter of prominent choreographer Raghuram, Gayathri began her career as an actress in the 2002 film Charlie Chaplin and after a career break, she began working as a choreographer in films during 2008.

The actress is also a politician who supported BJP party in the Lok Sabha election. In November 2015, Gayathri was appointed as Bharathiya Janata Party’s secretary for arts in Tamil Nadu. She had earlier joined the party in 2014 in the presence of BJP president Amit Shah. Recently, she got appointed as a president of Art & Culture Wing of BJP Tamil Nadu.

“Vinayagar Chathurthi will happen Even in Christian International countries. DMK cannot stop it.. Tamil Nadu will Celebrate Vinayagar Chathurthi with protocol. Our Hindu festivals will not be compromised for some missionaries. Shut TASMAC” Gayathri said in her recent tweet, confronting Chief minister MK Stalin.

Previous articleGambhir Trending In Internet After Dhoni’s Appointment!!
Next article“Now You Can Su*k It” AB De Slammed Steyn For Supporting Bumrah !!

Hashtag "Balaji Murugadoss" is trending nationwide with people reacting to the incident that took place in the Bigg Boss house last night. The 25...