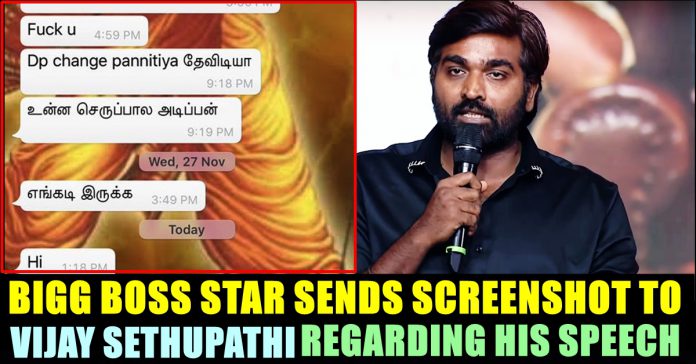 Vijay Sethupathi’s speech at “Master” audio launch triggered few people who believes in religion. Gayathri Raguramm of BJP party is one of them who is expressing her opinions through the micro blogging social media site twitter. The Master audio launch took place on Sunday.

Apart from Vijay, the speech of actor Vijay Sethupathi became one of the trending topic about the audio launch. The actor directly slammed the so called godmen by asking people not to believe them. He also lauded Vijay for asking producers to add his name in the posters. The actor further asked people not to panic due to Coronavirus. He thanked doctors for treating the patients who got affected by the virus. “We should understand that the only things that exists is humanity. No super power will come from sky to save us” he said during his speech.

“There is another vicious virus exist in our society. They are fighting for god. I would like to tell one thing. Go exist in this world for many years. But there ain’t a man who has the ability to save God. Don’t deal with a human who says that he could save the God. Don’t argue with those who are saying that their religion is superior. Instead answer them in a way of teaching humanity. It is humans who are living on earth, not God. Only a human could save his fellow human. This is a place which is made for humans and we should live by sharing love towards each other” he said during his speech.

Sharing few screenshots from her Whatsapp, Gayathri Raguram who is known for acting in Tamil films and for choreographing, has posted a post in her official Twitter account. In the screenshot, we can see an abuser sending abusive texts to the actress. In her post, she wrote “To Vijay Sethupathi, this is the humanity we all are going thru. They are not your fans. they r VCK and DMk cadres sharing numbers to pretend to be your fans. If they are your fans this is the kind of humanity they have. Buruda vidra Sami gumbal better ah or these unethical people?”

To @VijaySethuOffl this is the humanity we all are going thru. They are not your fans. they r VCK and DMk cadres sharing numbers to pretend to be your fans. If they are your fans this is the kind of humanity they have. Buruda vidra Sami gumbal better ah or these unethical people? pic.twitter.com/9aaLFLIFoZ

I will not go to police and waste my time for tasmac alcoholics who call my office for their fun.

After hearing to the speech of Vijay Sethupathi, Gayathri Raguramm, on March 16 said that she feels sorry for him for the way he sees god. Check out her tweet here :

Just for posting my view and nothing offensive I said pic.twitter.com/d5iAjwdJyK

What do you think on this speech of Vijay Sethupathi and Gayathri’s reactions to it !!

Previous article96 Jaanu Replied To All The Memes & Trolls Against Her Audio Launch Blunder !!
Next articleBhavana Appreciated Producer’s Speech ?? Check Her Reply

“Why Me God??” Selvaraghavan’s Emotional Words !!

Selvaraghavan, one of the most influential filmmakers of Tamil cinema, came up with an emotional note to himself, revealing the trauma he went through...

The first one day International match between India and Australia inaugurated in Sydney Cricket Ground. Australia who won the toss decided to bat first....