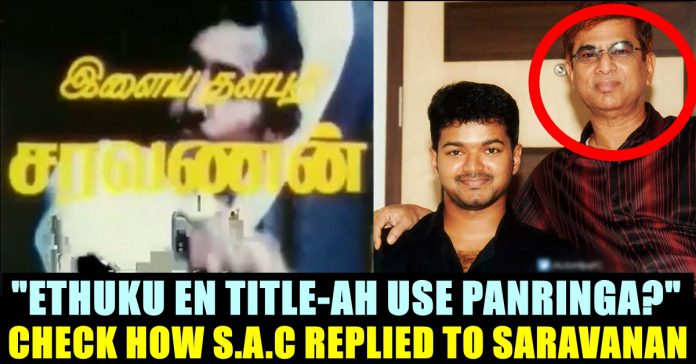 Actor Vijay who was last seen in Atlee’s Bigil, is about to appear in Lokesh Kanagaraj’s “Master” which is postponed without further notice due to Coronavirus lockdown. Being one of the very few actors who has huge fan following in South India., Vijay acted in more than 60+ films and is in the top race to become the highest paid actor in Kollywood.

Vijay was fondly called as “Ilayathalapathy” by his fans till his “Mersal” film directed by Atlee. From “Mersal”, Vijay’s title changed to “Thalapathy” from “Ilayathalapathy”. He is widely addressed as “Thalapathy” nowadays by most of his colleagues and by his fans. However, before Vijay’s entry into Tamil film industry, it was actor Saravanan who had the title “Ilayathapathy”. In his films which got released in the earlier days of his career, his name was credited with a nickname “Ilaya Thalapathy”. The screenshot of the same is being widely circulated by the fans in the social media platforms.

Before Vijay and Vishal became Ilaya Thalapathy and Puratchi Thalapathy, the titles were used by #Saravanan (Nallathe Nadakkum, 1993) and #ArunVijay (Priyam, 1996) respectively.

Saravanan who debuted through 1991 film Vaidehi Vanthachu as a lead actor went on to act as lead hero in many other films in the mid 90s. He continued to play the lead roles in films throughout the 1990s, later turning into a producer and director for his own films. After a sabbatical, Saravanan made a comeback through Paruthiveeran (2007) in a supporting role, and has since continued to play character roles in Tamil films. Since Paruthiveeran, Saravanan is being fondly called as “Chithappu”.

The actor who became familiar among the current generation through his Bigg Boss stint, has opened on how he lost the title to actor Vijay. “I don’t remember the year clearly. During mid 90’s, they conducted a function in Salem four roads junction to appreciate me as I successfully entered cinema industry from my town. Veerapandi Aarumugam of DMK participated in the function as the chief guest as my father had a good bonding with him.” said Saravanan to Vikatan while talking about the “Ilaya thalapathy” title which is trending in internet now.

“After that incident, my film “Nallathe Nadakkum” released. It was the 100th film of director K. Shankar who directed M.G.R in many movies. That is the first movie in which my name appeared in the credits with the nickname “Ilaya Thalapathy”. After that, I used that title in a film named as “Suntharam Plus two” and in a film which was produced by myself. I started using that title regularly” he said.

“When everything was going well, I suddenly started getting less chances though I was ready to act in character roles. I don’t understand how the number of opportunities got reduced all of a sudden and I don’t know whether it was me who couldn’t make use of opportunities well” the Bigg Boss star said.

“Due to the less chances, I forgot the title and that is when I happened to see this same title in front of Vijay’s name in one of his movies. I got shocked and immediately went to director S.A Chandrasekhar’s office with my brother and asked why they are using our title. For that he asked me to use the title if I ever get film opportunities. However, they didn’t stop using the title in Vijay’s upcoming movies”

“I don’t know what he thought while saying that. I never got film chances after that to act as hero and I started ignoring the title. What’s more funnier is, Veerapandi Aarumugam gave me the title “Ilayathalapathy” by considering Stalin. Now, they started calling Vijay as “thalapathy”.” Saravanan said in his interaction.

When director S.A Chandrasekar approached to respond regarding Saravanan’s allegation, the “Capmaari” maker denied to answer, according to Vikatan.