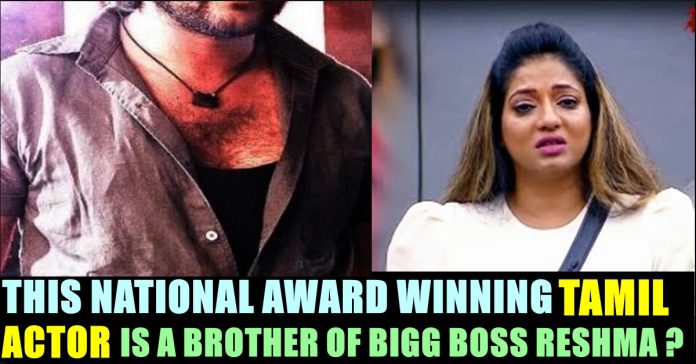 BIGG BOSS Reshma Is A Sister Of This Emerging Top Hero ?? SHOCKING !!

Reshma has become the fifth contestant to get eliminated from Bigg Boss Tamil 3. This eviction came despite many expecting Sakshi because of whom the audience wasn’t quite happy with the drama she created with Kavin and Losliya.Viewers were apparently getting tired of their love triangle. Host Kamal Haasan had also advised Kavin and Sakshi to get their act together. However she got evicted the very next week after Reshma. One of the very interesting fact about Reshma is that she is a sister Bobby Simha who is known for his appearance in many Tamil films. He won National award for the film Jigarthanda and is busy doing films as protagonist. She herself made it clear about the relationship between herself and Bobby Simha in an old interview.

Check out the interview here :

In the interview she also said that her father is a producer in Kollywood long back. After getting evicted Reshma in an interview about Bigg Boss said “Half of them inside the house requiring financial stability. Tharshan who left his computer job for this game show is in need of financial stability and he even left his country for it. Mugen’s story will make us cry. Almost everyone in the house are from middle class” Bobby Simha who was last seen in the movie Agni Devi which was caught in controversy, was married to actress Reshmi menon and they both have a beautiful  daughter. Bobby Simha is now working in a film called Seerum Puli in which he is playin the role of Velu Prabhakaran. He is also doing a film named as Vallavanukkum Vallavan. Some of his notable works are Neram, Saamy-2, Iraivi and Thiruttu Payale-2.

Previous articleVanitha Mentioned “Durga” To Abhirami In The First Promo ! Check Out To Know Who She Is !!
Next articleThis BIGG BOSS Contestant Posted Screenshot Of A Fan’s Chat !! Check Out Why !!

Afghanistan rode on an unbeaten knock of 74 runs by Hashmatullah Shahidi to pull off a three-wicket victory over Pakistan in a last-over thrilling...

BREAKING : MS Dhoni’s Retirement From IPL !! : His Statement Will Leave You Dejected !!

A brilliant innings from Faf du Plessis (67*) helped Chennai Super Kings beat SunRisers Hyderabad by two wickets in the first qualifier of the...

Vijayalakshmi Feroz, who walked out of Nayagi daily soap, has entered the Bigg Boss Tamil 2 house as a wild-card entrant. The latest promo...

Old advertisements, interviews, videos that are related to the Padma Sheshadri Bala Bhavan school are surfacing in social media platforms after a number students...