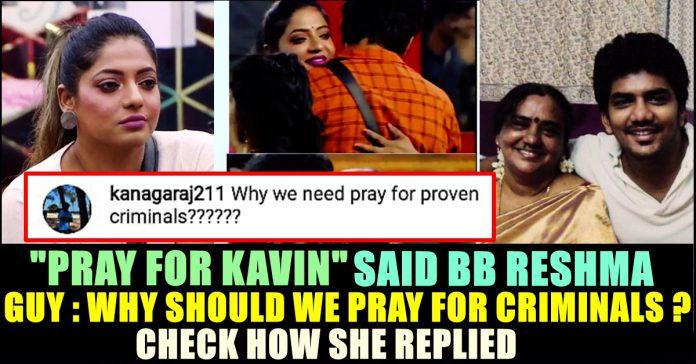 After getting evicted, Reshma became very much active on social media platforms, especially in Instagram. In one of her interview after eviction, Reshma revealed how money plays a vital role among the contestants of current Bigg Boss show. Reshma even asked Kavin to pay the college fees of her son during a conversation.

Now the actress has reacted to the issue of Kavin which is grabbing the headlines for past few days. It has been alleged that Kavin’s family members including his mother sentenced for 5 years jail for chit fund cheating.

Kavin’s Mother A. Rajalakshmi, his grandmother A Thamayanthi and aunt S Rani are spending their time in Trichy Central Prison. Reshma Pasupuleti has reacted to the news and asked her followers to pray for him. In her Instagram post she wrote “Let’s pray and not judge others let’s be above all the hate. We can only hope everything will be alright. Spread positive thoughts towards a negative situation, our thoughts have power. I’m praying for your family”

Let’s pray and not judge others let’s be above all the hate. We can only hope everything will be alright. Spread positive thoughts towards a negative situation, our thoughts have power. I’m praying for your family @kavin.0431 @kavin_army_3.0 @kavin_forever_army @biggboss3.0tamil @biggboss3 @ikamalhaasan @endemolshineind @vijaytelevision

On seeing this post, many Instagram users confronted it and asked why should they pray for him. “Can pray for 29 family..cheated by kavin family??avangkalukum manasu irukku..” said one of an user to which Reshma said that Kavin is inside the house and earning only to pay the money back. Check out the screenshot of their conversation here :

Another user asked Reshma to give money for Kavin’s family instead of praying. “Please give lakhs of money to kavin family mam help them. Prayer won’t help! Only Pay will help”

One more user asked why he should pray for proven criminals. For that comment Reshma said “he doesn’t know his fam situation at. the moment I’m sure he will take care of it one he’s out”

Reports says that the family members of Kavin haven’t paid back the money to any of the members who paid money in their chit fund and cheated Rs. 32,82,000 of them. The complaint was registered in Trichy economic crime division on 2007. The investigation started taking place since then.