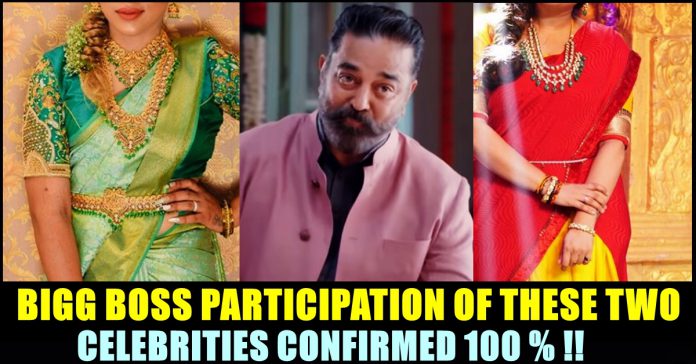 Bigg Boss participation of popular anchor Priyanka who is known for hosting Super singer, Start music and several other shows, has been confirmed as she failed to make her presence in the shows that she regularly hosts. Ma.Ka.Pa Anand and Shivaangi replaced her as anchors in Start music and Super Singer season 8 respectively. It is believed that she could be spending her quarantine period now and fans are pretty much excited to see her in the 100 days reality game show.

Promotional videos starring Ulaganayagan Kamal Haasan started surfacing in the official social media handles of Vijay Television ahead of the fifth season of the Bigg Boss show. Brushing off the rumours on the change of host, Kamal Haasan has been nailing it with his same old charm and looks in the promos. However, speculations on the 15 plus celebrity contestants are doing rounds in social media platforms.

Season 5 of the most awaited reality game show Bigg Boss Tamil is all set to be inaugurated from the end of September month or the beginning of October. After the release of two main promos, questions about the 15 plus celebrity contestants who are going to take part is being unanswered still and speculations about the same is being made across the Internet. Many media portals came up with a list of celebrities who could participate in the cash rich show.

Anchor Priyanka’s name is doing rounds as one of the contestants, ever since the announcement about Bigg Boss season 5 got surfaced. Now, in a way of confirming the same, recent promo of Super Singer 8 released with Ma.Ka.Pa making the announcements instead of Priyanka. Watch the promo below :

Shooting of Start Music’s third season started with Bharathi Kannamma team and Ma. Ka. Pa hosted it too instead of Priyanka.

Moreover, Shivangi has been appointed as the anchor of the ongoing Super Singer season which became evident through one of her recent stories.

Sivaangi is taking over #SuperSinger8 as the anchor & Makapa is the anchor for #StartMusic S3, so it's almost confirmed that Priyanka is taking part in #BiggBossTamil5 eh?👀🚶🏻‍♀️ pic.twitter.com/MyFfsb42yL

Previous articleJUST IN : Virat Kohli Stepped Down From Captaincy !!
Next articleSamantha Getting Slammed By Her Own Fans For Replying To This Fan Of Her !!

Chinmayi Slammed This Face book Page For Spreading Fake News About Her !!

Popular playback singer Chinmayi reacted to a fake news that was spread against her by a Face book page named "Tamizh Naadu". The page,...

Apart From “Biriyani”, You Must Taste These Heavenly Sweets On This Special Day Of “Ramzan” !!

Ramzan might be a festival for Muslims, but it is a celebration for everyone. Yes, cause we get to have their awesome food, isn't...