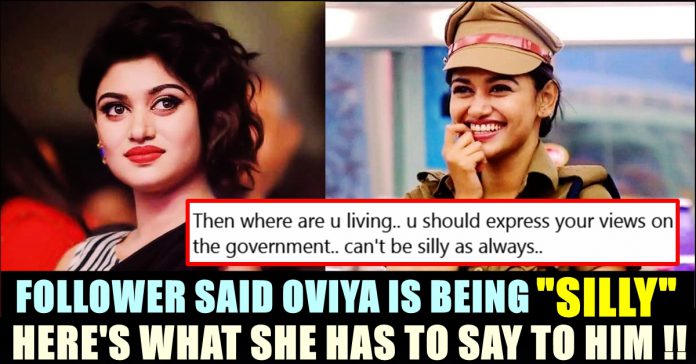 In the show which was hosted by Ulaganayagan Kamal Haasan, Oviyaa participated as one of the contestant among 14 other celebrities. Though she didn’t win the title of the reality game show, she became one of the most successful contestant with a huge fan followers. The concept of fans creating “Army”pages in social media for their favourite celebrities was started only since the Oviyaa’s Bigg Boss participation.

In the show, the actress attracted the audience through her bold statements and gutsy decisions inside the house. The actress confronted with almost all of her housemates inside the Bigg Boss house, including experienced dance choreographer Gayathri Raghuram and Ganja Karuppu. However the actress couldn’t make use of the fame she gained through Bigg Boss show as her movies after that show didn’t go well. But the fan base of the actress stayed the same and she continued to speak her heart out in public, including social media platforms.

Today Oviyaa has posted a tweet, expressing her opinion about Media’s approach towards celebrities. The tweet of the actress requested the Media not to ask politics related questions to her as she is an “Apolitical”.

The tweet of the actress read “Media should be conscious of not asking political questions to Apolitical actors. Seeking answers to the public on such topics would get you a different reality I think. IamApolitical #Peace 🙏”

Media should be conscious of not asking political questions to Apolitical actors.
Seeking answers to the public on such topics would get you a different reality I think.#IamApolitical #Peace 🙏

To this tweet one of her follower asked her why she is living. He further insisted Oviyaa to express her opinion on the government instead of being silly. Here’s his tweet :

Then where are u living.. u should express your views on the government.. can't be silly as always..

To this tweet of the twitter user, Oviyaa politely replied that every one in the world will not appreciate her her expressions. Her tweet read “The world we all live in, may not appreciate my expressions dear” read the reply of Oviyaa. Here’s her tweet :

The world we all live in, may not appreciate my expressions dear

Further she replied to another user who asked her express her views irrespective of what world thinks.

That gives a little hope to my views.thanku

Oviya Helen, on the work front is going to be featured in a movie named as Raaja Bheema in which her co-contestant of Bigg Boss show, Aarav is playing the male lead.

Previous articleTop Actor Of 80’s Expressed His Grief For Not Getting An Invite For The Grand Event !!
Next articleWhy Producer Released “Kaithi” In Hotstar ??

Actor Redin Kingsley who is known for his performances in films such as "Kolamaavu Kokila", "Doctor", in a recent interview, said that Nelson Dilipkumar...

Actress turned Politician Divya Spandana's sensational statement about female stars getting trolled for their personal choices is going viral among the users of social...