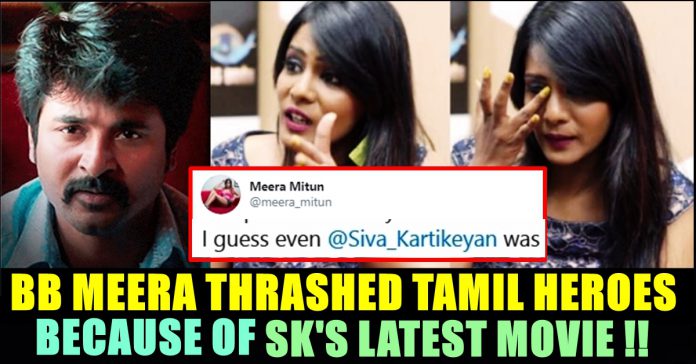 The actress, few weeks before uploaded a post in her Instagram account saying that she is going to be featured in Sivakarthikeyan’s Namma Veetu Pillai. The film which was released lately is now running successfully in theatres.

Now the actress came up with an allegation against the makers of the movie. In her series of tweets, Meera says that the scenes she acted were removed from the movie. In her tweet, Meera mentioned that the director and producer of the movie said to her that her scenes were deleted because she went to participate in Vijay Tv’s Bigg Boss show. SHOCKER : Leaked Audio Of Meera Mithun Targeting Mugen Goes Viral !! MUST CHECK !!

“Ten days Shoot in scorching heat and round the clock work for the movie #NammaVeettuPillai 🙂 Also one song shoot Jigiri dhosthu…. After I come out from bigboss, @[email protected]_dir tell me they will remove me from the movie because I went to @vijaytelevision” her tweet read.

Ten days Shoot in scorching heat and round the clock work for the movie #NammaVeettuPillai 🙂 Also one song shoot Jigiri dhosthu…. After I come out from bigboss, @sunpictures @pandiraj_dir tell me they will remove me from the movie because I went to @vijaytelevision….

Followed by this, she posted one more tweet saying that actor Sivakarthikeyan was also came from to Vijay Television. She asked the makers of the movie to get the culture of professionalism.

I feel really unhappy about the lack of healthy competition in Kollywood !
I guess even @Siva_Kartikeyan was from @vijaytelevision !
Get the culture of professionalism in Kollywood first and foremost, to enhance the quality of movies and artists !

In her final tweet Meera Mithun slammed the entire Kollywood industry and said that this is the reason behind Priyanka Chopra’s exit from Kollywood. She even slammed the Tamil cinema heroes. Check out that tweet below :

Well now I understand why @priyankachopra never turned back kollywood. People here can’t stand a woman who is famous especially heroes who still stand on male chauvinistic attitude and inferiority complex of pairing with a famous talented woman!
Grow up #kollywood.

What do you think on these tweets posted by Meera Mithun ?? Comment your views below !!