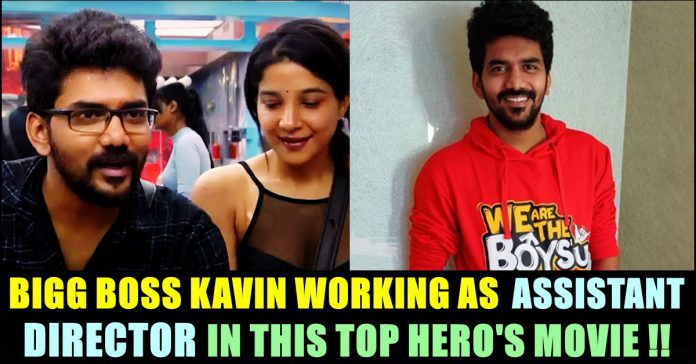 Nayanthara starring “Kolamaavu Kokila” director Nelson Dilipkumar revealed that Bigg Boss fame Kavin is working as assistant director in his upcoming film “Doctor” which has actor Sivakarthikeyan in the lead role. Kavin who already acted in a film called as “Natpuna Enna nu Theriyuma” is protagonist has announced that he is going to act in “Lift” with Amritha Aiyer as his next.

While congratulating actor Sivakarthikeyan and Anirudh for grabbing the first and second spots in the Most Desirable Men list of 2019 of Chennai Times, Nelson also mentioned Kavin who took place in the sixth spot. He asked Kavin to follow Anirudh and Sivakarthikeyan by being an assistant director.

In his tweet, Nelson said that his upcoming film depends on the Sivakarthikeyan and Anirudh. “Most desirable Man no.1 Siva Kartikeyan
no.2 Anirudh unga rendu pera nambithaan en padamey iruku, konjam paathu pannunga Zany faceZany face so happy for u my loves. aparam no.6 Kavin oru AD ya renduperaiyum follow panikonga” his tweet read.

The makers of “Doctor” released the first look of the film released on the birthday of Sivakarthikeyan. Here’s the poster :

Here is the first look of my next #DOCTOR 😊👍#DoctorFirstLook pic.twitter.com/ztqfkG4TUY

It is notable that Sivakarthikeyan and Kavin hailed from Vijay Television. For Kavin’s upcoming film “Lift”, Sivakarthikeyan wished him through his official twitter account. Here’s how he wished :

Kavin rose to fame through Bigg Boss season three in which he walked out of the show in mid way with 5 lakhs money offered by Bigg Boss. Being one of the most controversial contestant in the Bigg Boss house, The actor who was approached in last season, decided to take part in the season took place in 2019 as he was acting in a movie as protagonist at that time. However, the movie which was titled as “Natpuna Enna nu Theriyuma” release delayed for several reasons and went unnoticed once it got released. “Pizza” “Sethupathi” fame Ramya Nambeesan played the role of his love interest.

As far as the upcoming film of Kavin is concerned, it is touted to be a seat edge horror thriller. Directed by Vineeth, both Kavin and Amritha are playing the role of IT professionals. 80% of the film’s shooting has been completed according to reports.