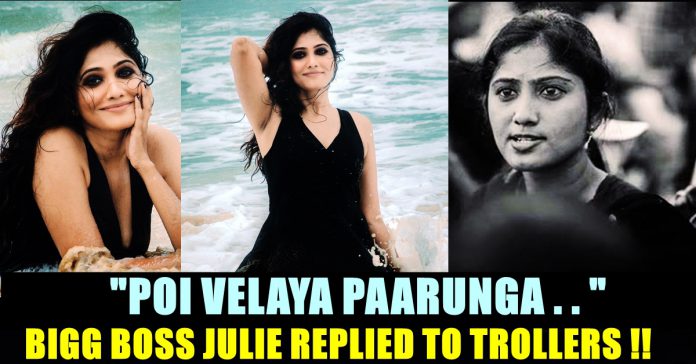 Julie who is known for her stint in Bigg Boss house, made her come back in social media with a bunch of pictures from her recent photo shoot which were captured in a beach. The pictures went viral across social media platforms with various kind of reactions. In a way of replying to them, Julie uploaded a couple of story in her official Instagram account. She who got irked with the trollers saying that she is looking good due to her financial status, replied to them by asking them to live and let live others.

In this internet era, Photoshoots are playing a major role for the aspiring actors and models in the growth of their career. Even high profile actors such as Samantha, Vijay Sethupathi are participating in photoshoots occasionally to build their profile. It helped many forgotten actors to make their re-entry into film industry as well.

Aspiring actress Julie who has been conducting photoshoots with modern and traditional attires to impress fans, followers and movie producers, recently came up with a series of pictures wearing a black attire. Check out them below :

Check out her tweets and captions below :

These posts of her garnered various kind of reactions from her followers and from the users of the social media platforms. Replying to a set of people who criticized her by saying that she gained this look with the help of money, Julie replied saying that it is not the case and asked them to let her live.

In her next story, Julie shared a post which took stand against the trollers who spewed hatred at Julie. Here’s the post :

Being a nurse by profession, Julie acted in short films and music videos before entering Bigg Boss shows which are available in youtube. After getting participated in the Bigg Boss show, the people’s way of seeing Julie changed completely. Julie became the first victim of Bigg Boss’s “Kurumpadam” which is used by Kamal Haasan to reveal an individual’s original behaviour. However, after seeing the “Kurumpadam”, Julie alleged that 5 seconds of her video footage is missing from that “Kurumpadam”.

Fans Accused A.R Rahman By Saying That He Forced His Daughter To Wear Burkha !! Here’s How She Slammed Them Back !!

It is 2019 and here we are, arguing yet another Muslim woman's right to wear a burqa. This time, the woman drawing the nation's...