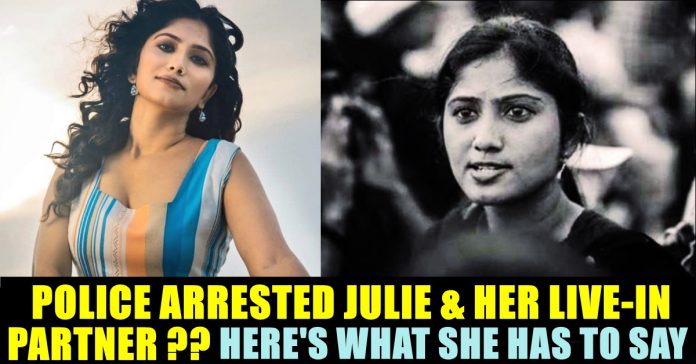 Julie Involved In Live-in Relationship With A North Indian Businessman??

To a fake news which said that Julie is involved in a live-in relationship with a north Indian business man and got arrested by Police, the former Bigg Boss contestant replied through the official twitter account. The facebook page named as “En Idhayathil Irunthu” posted the baseless news with the picture of Julie. Slamming such pages, Julie requested people not to encourage such facebook pages.

Julie became a familiar face among Tamil speaking netizens, not through Bigg Boss show but through the videos that circulated during the historical protest of Jallikattu. She gained a huge sum of support from the protesters for her participation in the protest. The way she led a crowd through her slogans attracted many people’s attention which resulted in Julie becoming one of a contestant in Tamil reality game show Bigg Boss, hosted by Ulaganayagan Kamal Haasan.

After her Bigg Boss stint, trailers and first looks of her films emerged but failed to hit the big screen. She even hosted few dance shows in Kalaignar TV after Bigg Boss. Now, the aspiring actress is spending her quarantine period by uploading pictures from her photoshoots.

For past few days, news on her wedding with a business man did rounds in social media platforms. “En Idhayathil Irunthu” facebook page went one step ahead and said that she got arrested by Chennai police for spending time with her lover by beach.

Capturing the screenshot of the same, Julie slammed the facebook page. She asked public people to report the page. “Shame on u to spread fake news and spoil my name.. Please do not encourage pages that defame a person like this #cyberbullying and kindly report this page.. And news regarding my marriage that is circulating in the media is totally fake.” her tweet read.

Shame on u to spread fake news and spoil my name.. Please do not encourage pages that defame a person like this #cyberbullying and kindly report this page.. And news regarding my marriage that is circulating in the media is totally fake. pic.twitter.com/X24TO6wFKy

Being a nurse by profession, Julie acted in short films and music videos before entering Bigg Boss shows which are available in youtube. After getting participated in the Bigg Boss show, the people’s way of seeing Julie changed completely. Julie became the first victim of Bigg Boss’s “Kurumpadam” which is used by Kamal Haasan to reveal an individual participant’s original behaviour.

Julie gossiping about Oviya to Gayathri Raguramm to gain her support was played as a “Kurumpadam” by Kamal Haasan in the first season. This made vast number of people to hate her. However Julie alleged that 5 seconds of her video footage is missing from that “Kurumpadam”.

In a way of making the viral meme which said that the world is fighting not only with COVID 19 but also with...

“Rs.2 Crore Is Enough For Me To Make A Film”- “Sembaruthi” Karthik Seeks Financial Help From His Fans !!

Television actor Karthik who is known for appearing in a serial named "Sembaruthi" after debuting through Vijay TV's "Kana Kaanum Kalangal", released a video...