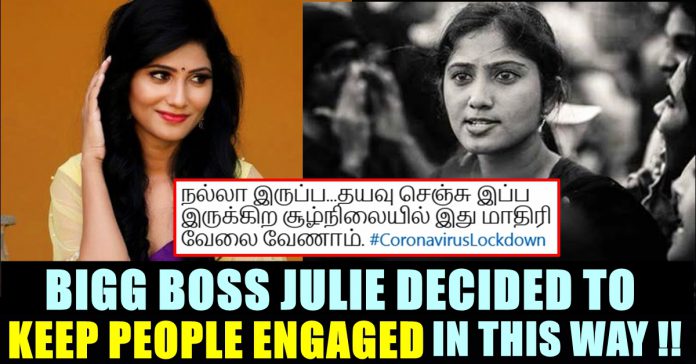 We are witnessing many kind of posts and videos in social media from people who are trying to keep themselves engaged. But Julie of Bigg Boss fame had other ideas as she decided to engage others other than engaging herself. She posted a picture of herself from one of her old photoshoot and said that she is posting pictures to keep people engaged.

Memes, jokes, work out videos, pictures of books, film suggestions are pouring in Internet as Indian government announced lock up till 14th of April month to prevent the Corona virus from spreading. People are glued to Internet to kill the quarantine period. Right from high profile politicians to cinema celebrities, everyone are sharing how they are killing the time and giving suggestions to their followers. Many of the heroines are also conduction chat sessions with their fans as they are forced to be in home.

Day 1 of #SelfQuaratine : Immersing myself in a book 📖. #SoFarSoGood #WeGotThis

Meanwhile aspiring actress and former Bigg Boss contestant Julie who rose to fame through protesting for Jallikattu, posted a picture of herself and decided to keep others engaged instead of being engaged. She wrote “Posting pics to keep people engaged. Stay home stay safe. Throwback” as her post’s caption by adding various hashtags insisting people to take safety measurements.

Having fifty thousand followers for her Twitter account, Julie is very much active in the micro blogging social media platform. However, we couldn’t predict how her followers understood her caption as they started trolling her in the comment sections. Did Julie mention this as “Keeping people engaged” ? We don’t know. Check out some of the reactions for her post below :

Julie gained a huge sum of support from the protesters of Jallikattu for her participation in the protest. Being a nurse by profession, Julie acted in short films and music videos which is available in youtube and is also tried her hand in acting as heroine in movies. After getting participated in the Bigg Boss show, the people’s way of seeing Julie changed completely. Julie became the first victim of Bigg Boss’s “Kurumpadam” which is used to reveal a individual participant’s original behaviour.

Previous articleHealth Minister Replied To The Koyambedu Bus Stand Controversy For The First Time !!
Next articleAnjana Replied To A Guy Who Called Her As “Sanghi” !!