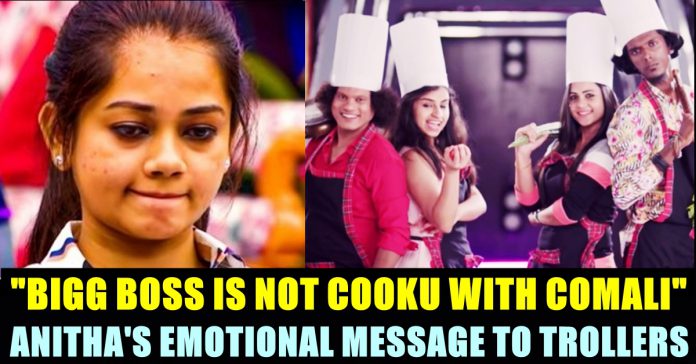 Anitha Sampath who took part in the season four of Bigg Boos reality game show, came up with an Instagram story conveying a message to the trollers of social media platforms. Replying to a story of a follower who wanted people to stop abusing the female contestants of Bigg Boss show, Anitha wrote note addressing the trollers. The former news reader said that it is just a game and explained how it would feel to an individual to face the baseless trolls in social media.

Bigg Boss is a show that was widely watched by the families in Tamil nadu. The show which identifies itself as a miniature of this entire world, connects with the family audience easily due to the problems and confrontations that are taking place between the contestants inside the house. The reality game show functions based on the votes of the audience. Aari Arjunan won the title and cash prize of Rs. 50 lakh with highest number of votes and Balaji Murugadoss became the first runner up with 6 crore votes from the audience.

Anitha Sampath got evicted from the show after spending 84 days inside the house. Her father R.C Sampath passed away two days after her eviction from the Bigg Boss house. He was 62 years old and the former news reader shared about it in her official Instagram account. She re-entered the house as a guest to fulfill her father’s wish. R.C Sampath wanted her daughter Anitha to complete her participation in the show.

Now, days after the show reached its end, Anitha came up with a story explaining how social media trolls affects an individual. She believed that the face contestants showed in the Bigg Boss house is not their permanent one as they are not going to live in a stressed atmosphere with 18 other strangers throughout their life.

Anitha said that the female contestants who participated in the Bigg Boss show are going through huge stress due to the negative comments they are receiving. She also made trollers realize that they are not going to earn anything by abusing the contestants. “You will start minding your business after posting a negative comment about an individual in social media but the one who is in the receiving end couldn’t forget it for a long time. It will hurt them” she said through her post.

“Everyone will learn from their lesson. Bigg Boss is not a show like “cook with comali”as you cannot enjoy everyone in Bigg Boss. Consider it as just a game and let the contestants lead a peaceful life” Anitha said through her post and tagged her co-contestants in it.

Through another story, Anitha thanked her followers who are giving her constant support through messages. She promised to interact with them through her own youtube channel and said that she doesn’t want youtube channels to make content out of her Instagram activities.

Check out her other stories where she replied to the messages she received from a follower and her reaction to Samyuktha’s Instagram story posted for the trollers.

“Why No Celebrity Raised Voice Now ?” Actress Questioned On The Pocso Arrests

Actress Kasthuri questioned why no celebrity raised voice on the recent POCSO arrests as they did for the PSBB issue. She who thanked police...