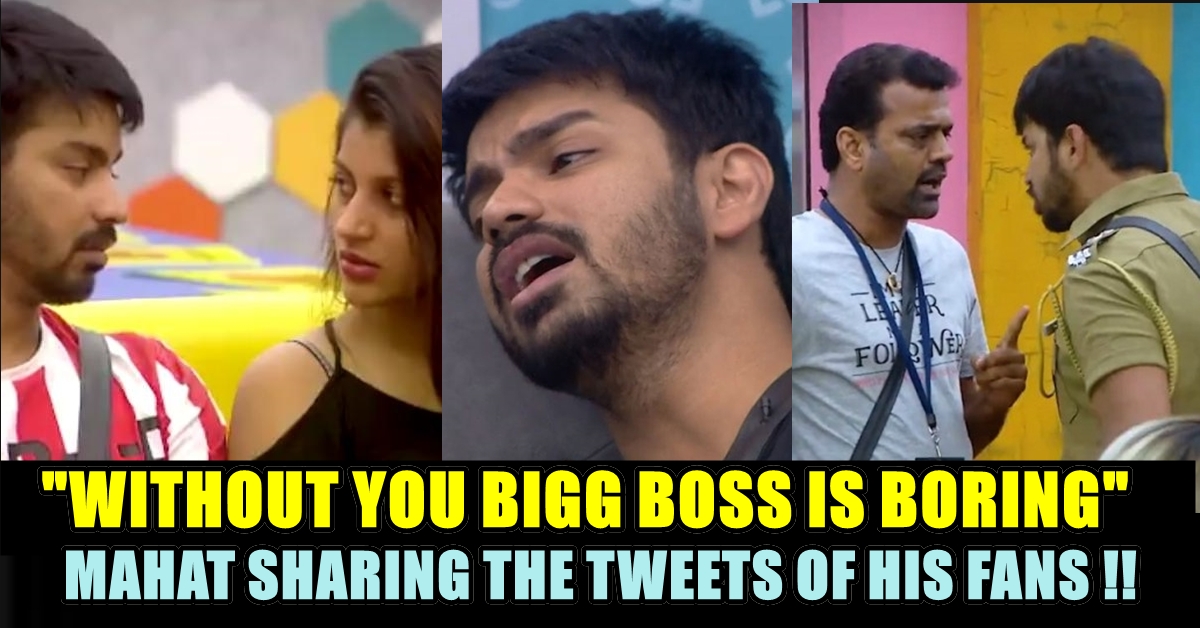 Now as Mahat came out of Bigg Boss he went to meet his dear friend Simbu straight away and he also released the video of it where Simbu welcomes him with friendly slaps. Afterwards his twitter timeline is filled with the retweets of Mahat. He retweeted the tweets of his fans where most of them saying that the Bigg Boss house is boring without him. It is really shocking to see that he was supported by this many as we have only seen the haters of him as everyone accuse him for being indisciplined inside the house. It is really happy to see his followers after his elimination as everyone including Kamal haasan expected that Mahat has to face lot of hatred outside the house. #BiggBossTamil2 #BiggBoss2Tamil
Its so overwhelming to see so many positive tweets for #Mahat considering how everyone was thrashing him on social media last week. Everyone is feeling for him on his exit. You’ve earned too many supporters Mahat. Way to go!!#mahatarmy

@MahatOfficial your my better and best favourite #biggboss housemate but Now iam feeling lonely without you here after the show will be not good I want u see in good platform in future https://t.co/fSQ0crTokD pic.twitter.com/FDC1ZObMDf

Miss you so much Mahat….. Bold guy…. Plz watch all the episodes…. Them u will realise many truths

@MahatOfficial i really wanted you to quit bigg boss in this nomination. Couldn’t accept d way u got influenced as u r always a gem.

I know how much you appreciate friendship, relationship and your fans as well so no worries. My support is always urs❤💖

@MahatOfficial excluding some things u were the only male contestant who didn’t speak at anyone’s back Na truely loved it…big boss is a house created to showcase the talent by performing tasks …and u did it 😍😍😍brother.
From nanga tha to big boss 😘

These are the tweets shared by Mahat, what do you think on this, let us know !!

Sachin Tendulakar Brutally Trolled Lasith Malinga After All These Years & You’ll Die Of Laughter Seeing This !!
Actor Prakash Raj Literally Abusing Those Who Do FAKE POLITICS !! A Police Complaint On Him For Hurting HINDU Sentiments !!