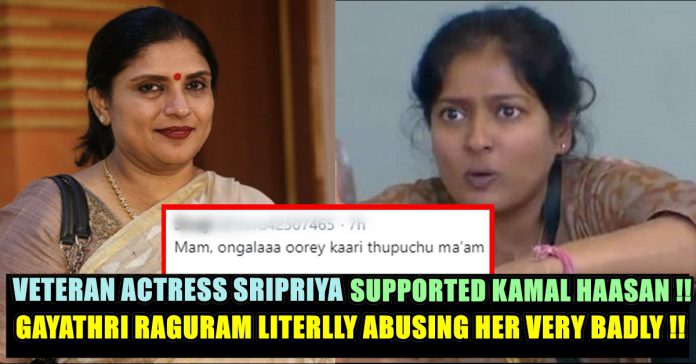 The battle lines are drawn. Within a matter of hours, Bigg Boss Season 2 contestants arrived at conclusions and formed impressions. Right now, the forces are aligning against Mumtaz. Nithya and Vaishnavi are close on her heels in the unpopular list. It all came to light when Bigg Boss summoned contestants to the confession room and asked them to name two individuals to be voted out. Mumtaz’s name popped up frequently as most feel she’s curt and domineering. At the end of Episode 2, Mumtaz was left standing with Ananth Vaidyanathan and Nithya. No one had anything bad to say about the popular Voice Coach except that he’s a bit aloof and yet to make an effort to mingle. But, hey! The man just got here. Cut him some slack, please. When it came to Nithya, there were a variety of criticisms ranging from being lazy to unhygienic. Other contestants who didn’t make the cut but came in for some firing were Vaishnavi and Riythwika. Issues concerning the former is that she’s too ‘aggressive’. The latter, most feel isn’t making an effort to strike up a rapport. A few stray mentions of Mahat, Ponnambalam, Mamathi and Ramya were also aired. The men were critiqued for not helping with the work load while these two women in particular drew flak for their anglicised behaviour. It also seems Aishwarya Dutta and Yashika Anand planning in their own way to win the title. They alsways roaming together in the house. Mumtaj , the leader of kitchen team explained the house mates about how they have to part the food for the rest of the week. The team also gave a task by BIGG BOSS to win the luxury budget. The team accomplished the task and won the luxury budget task. Though this week doesn’t have any elimination, to express every contestants opinion on others they made to vote for whom to be eliminated. Meanwhile Veteran actress Sripriya kept updating her opinion in a regular basis about Bigg Boss 2 in her twitter account. She also came to the Bigg Boss show in last season along with comedian Sathish. She shared her thoughts about the show with Kamal Haasan. As a continuation of that she is seen tweeting about the show in a regular manner which shows her interest towards BIGG BOSS. And not to be missed, she is a very close friend of Kamal Haasan who paired with him in some of the cult classic movies such as Vaazhve Maayam , Aval Appadithaan etc. Here’s some of her tweets about Bigg boss 2 :

Welcome Oviya … let u be a source of power to the rest. On seeing her tweets Gayathri Raguramm who is prominently known as a dancer , actress in Kollywood attacked Sripriya without even considering her age and experience. Check her abusive tweet below :

paati comment pannale ya for popularity for putting their own industry ppl down in name of nalavar yaar kettavar yaar jing chuck to Makkah in pradhinidhi. Such celebs craving for attention by commenting others should participate if so interested. Can’t face one on one or 6..5 cr.

For this tweet one of the twitter user replied “I guess you are pointing Sripriya” for which Gayathri Raguramm mentioned Sripriya with a term which is even worse. Check out the conversation below :

Lot of people expressed their hatred towards Gayathri Raguramm’s tweet. Here is what they said :

Dint you feel the same when you were commenting about Oviya(mostly) and others inside BB house? Dont they come from the same industry as you?

Werent u commenting abt Oviya..vesham & other cheap words n putting her down? Appo ava same industryla ulla ponnunnu therila! Atleast @sripriya ma’am maintains a dignity when commenting..never has abused anyone.

Why don’t you mention the name of the person or tag that person whom you are referring to, instead of posting a indirect tweet.. Bayama…
Neenga thaan bold lady aachey. Gayathri Raguramm is alleging that Sripriya commented on her character last season while she was inside Bigg Boss house. She also says that she has every right to comment on Sripriya now. Here’s her explanation tweet :

What do you think on Gayathri Raguramm’s indirect allegations on Actress Sri Priya ?

Kamal Haasan released a "thanks note" through the official Twitter account of his production house Raajkamal films international and expressed his gratitude to fans...

In a statement on Saturday, BCCI confirmed that it will take five to six weeks for the 33-year-old Saha to recover. "Mr. Wriddhiman Saha...

On Wednesday morning, IMDB released its list of the most popular Indian films of the year so far and Kamal Haasan's "Vikram" topped the...