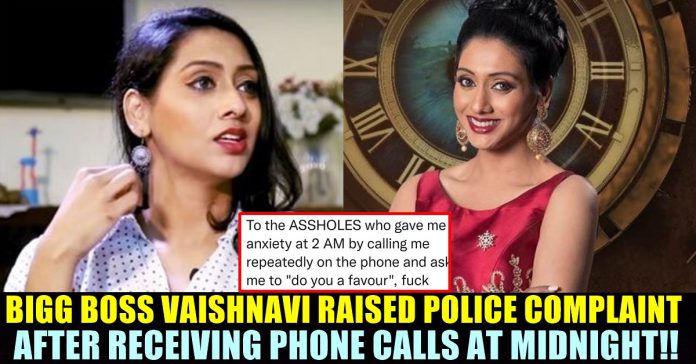 Former Biggboss contestant Vaishnavi, has posted a tweet on her Twitter account against anonymous phone calls she is receiving at midnights. She has also warned the strangers that Chennai Cyber Crime has assured to help her with tracing these people.

RJ Vaishnavi came to the limelight through Bigg Boss Season 2, in the year 2018. After the show, she has been quite active on social media and has been updating the followers with her happenings in life. She has 83.3K followers on Instagram. She also has a Twitter account (@Vaishnavioffl). She got married to her long-time boyfriend Anjan in 2019. Vaishnavi has become an entrepreneur by starting Nunchi: The Communication Consultants in 2020.

Vaishnavi in her Twitter account (@Vaishnavioffl) has posted a warning note to the strangers that harass her through calls and make her anxious. Vaishnavi has been receiving anonymous calls at 2.00 AM repeatedly. Through the tweet, we come to know that the strangers have been asking her to do them ‘favors’. Nevertheless, she has also let them know that she is going to report their numbers to the police. Vaishnavi is clueless about how these people got her number. However, when her partner attended the call they have hung up the call.

Oh and whoever this person was referred to me as Valia, a name I go by on here. How they got my number is beyond me, but fuck you, because you cut the call when my partner answered the phone and you heard a male voice.

She has further cautioned them saying that Chennai Cyber Crime has got in touch with her. Cyber Crime has assured her that she will be directed to the authorities who will help her in this case. Vaishnavi has ended the tweet by saying, “No harassment is too small to be reported. It’s because we do not report that assholes become bold enough to harass.”

Chennai Cyber Crime really coming through. They reached out to me and assured I would be directed to the correct authorities who would handle my complaint. No harassment is too small to be reported. It’s because we do not report that assholes become bold enough to harass.

Few people have commented feeling concerned about her. Vaishnavi has replied to them as well.

Yeah slightly better. But I woke up in panic cause I thought something bad had happened. What sane person calls at 2 AM unless pre-agreed /emergency? Fucker had the audacity to call back multiple times, from a different number after I blocked one.

Yeah I mean a little annoyed but otherwise ok

Hope those fellows are caught and prosecuted. Good luck di!